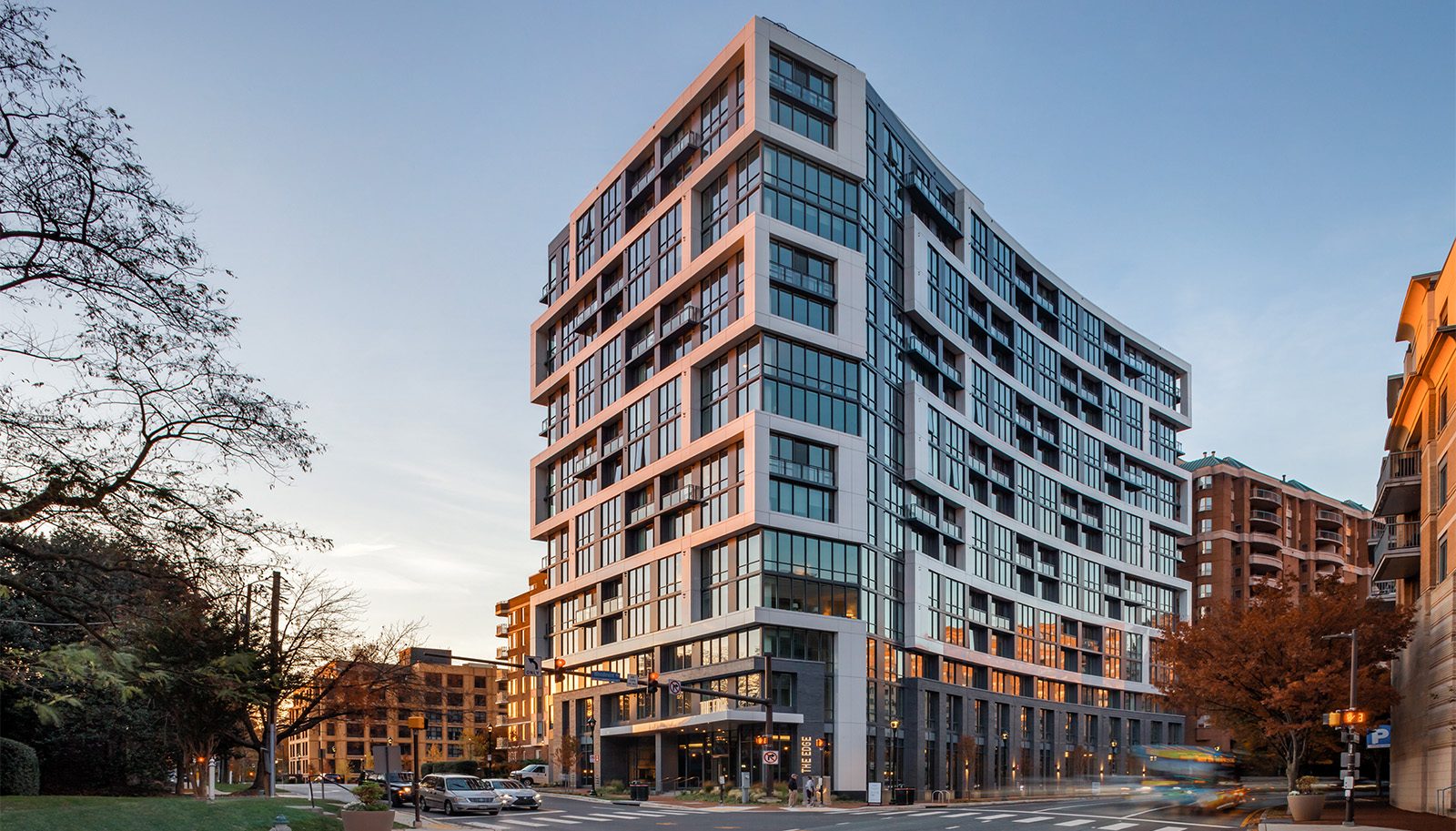 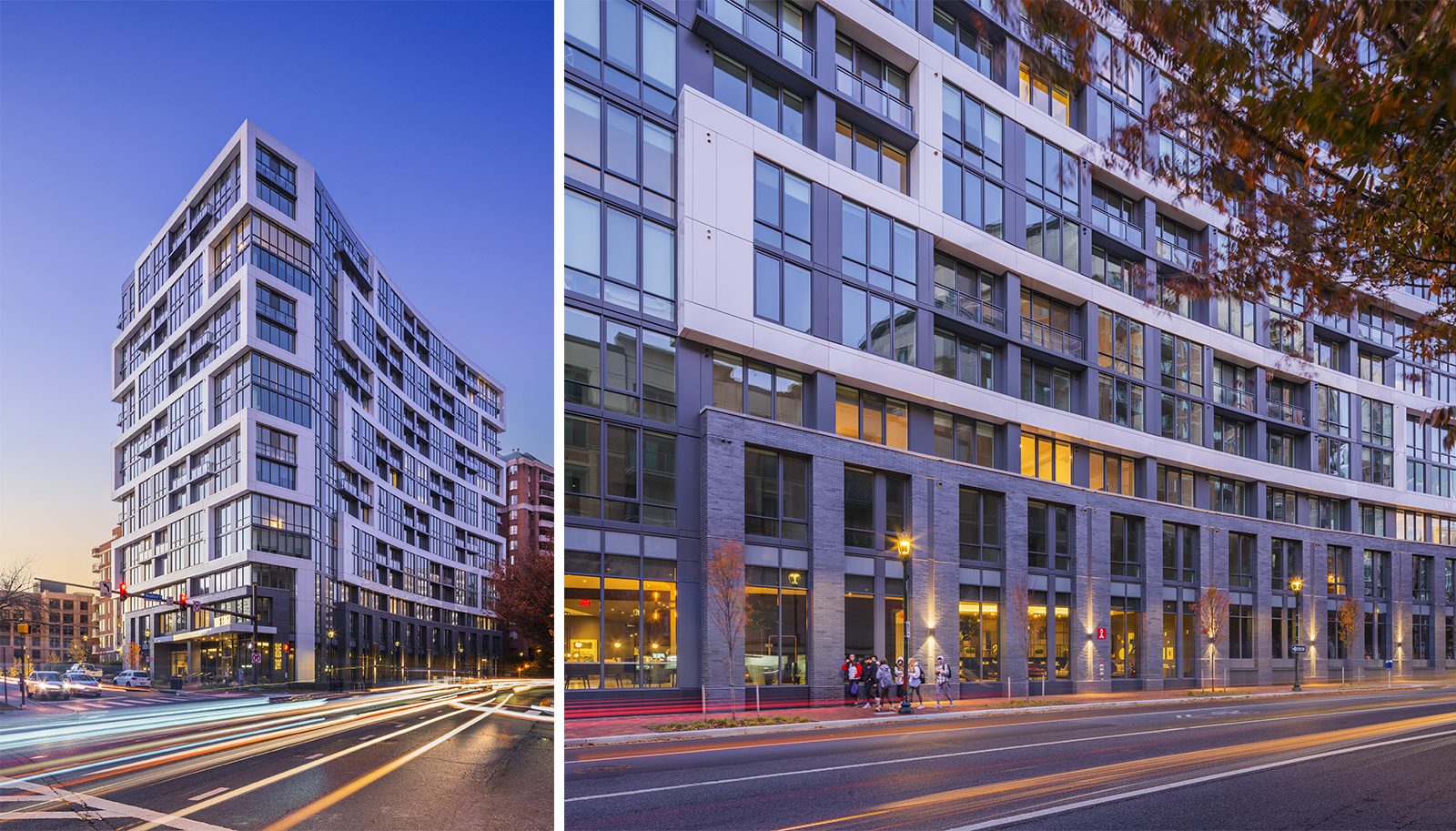 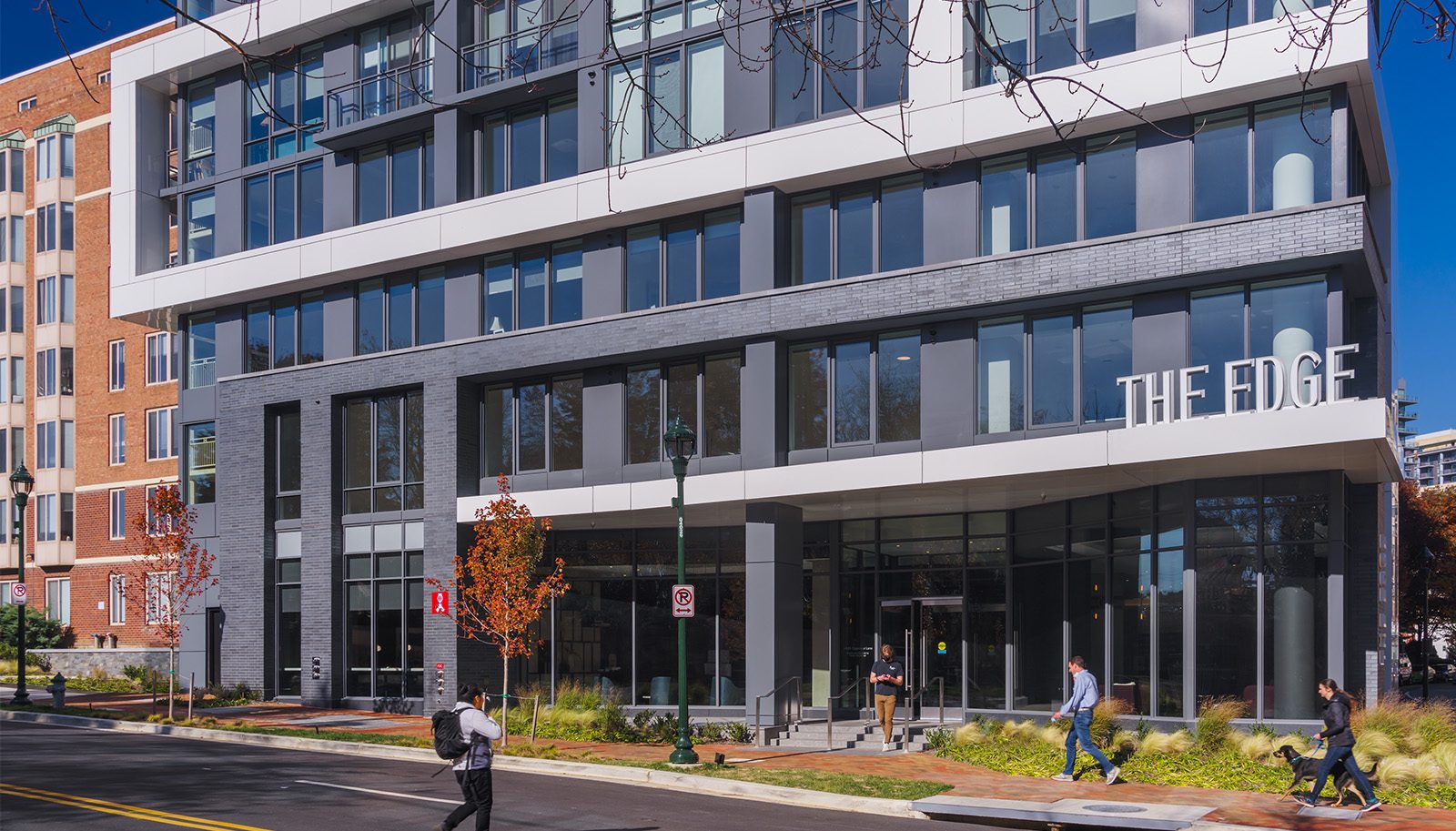 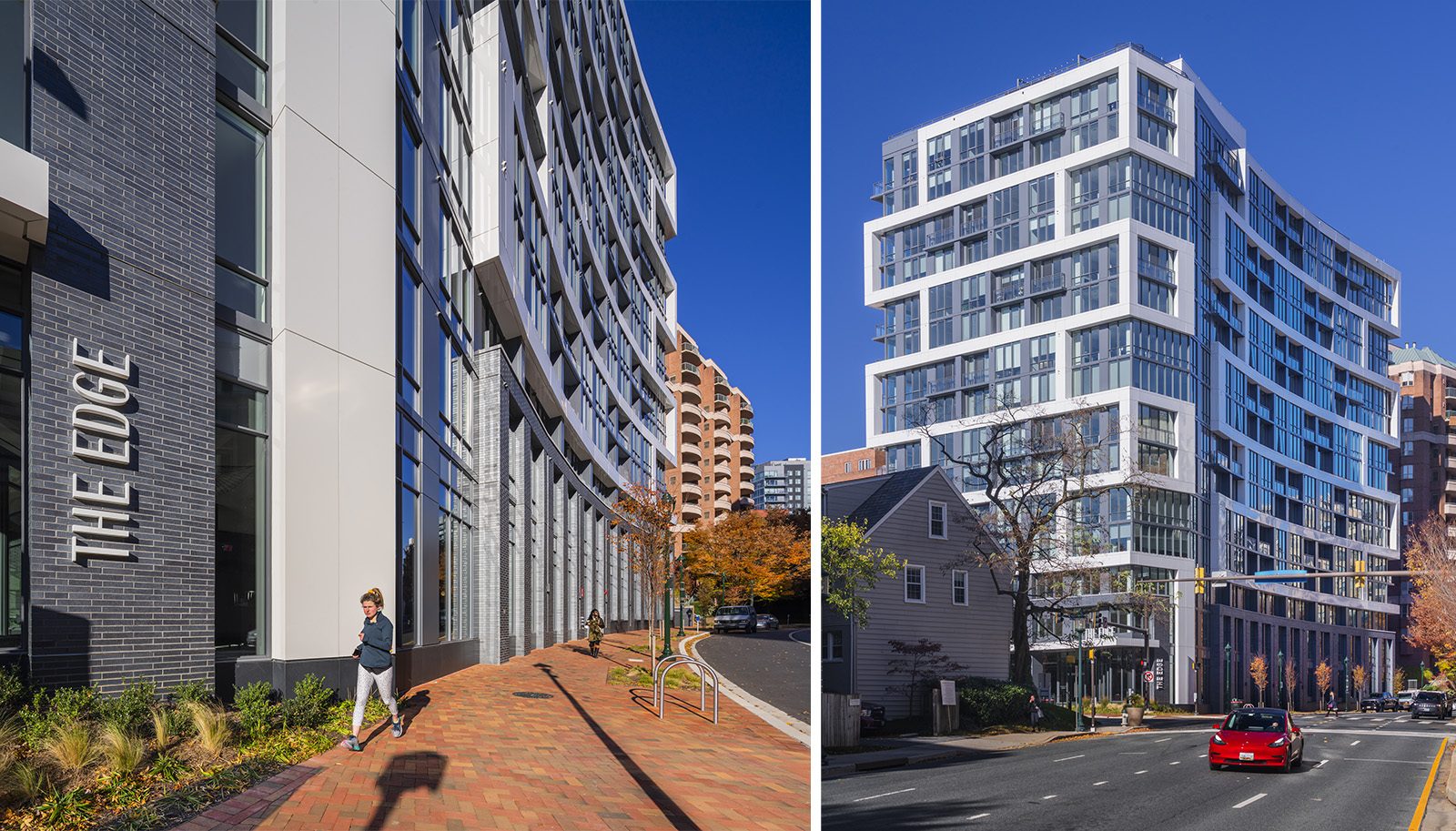 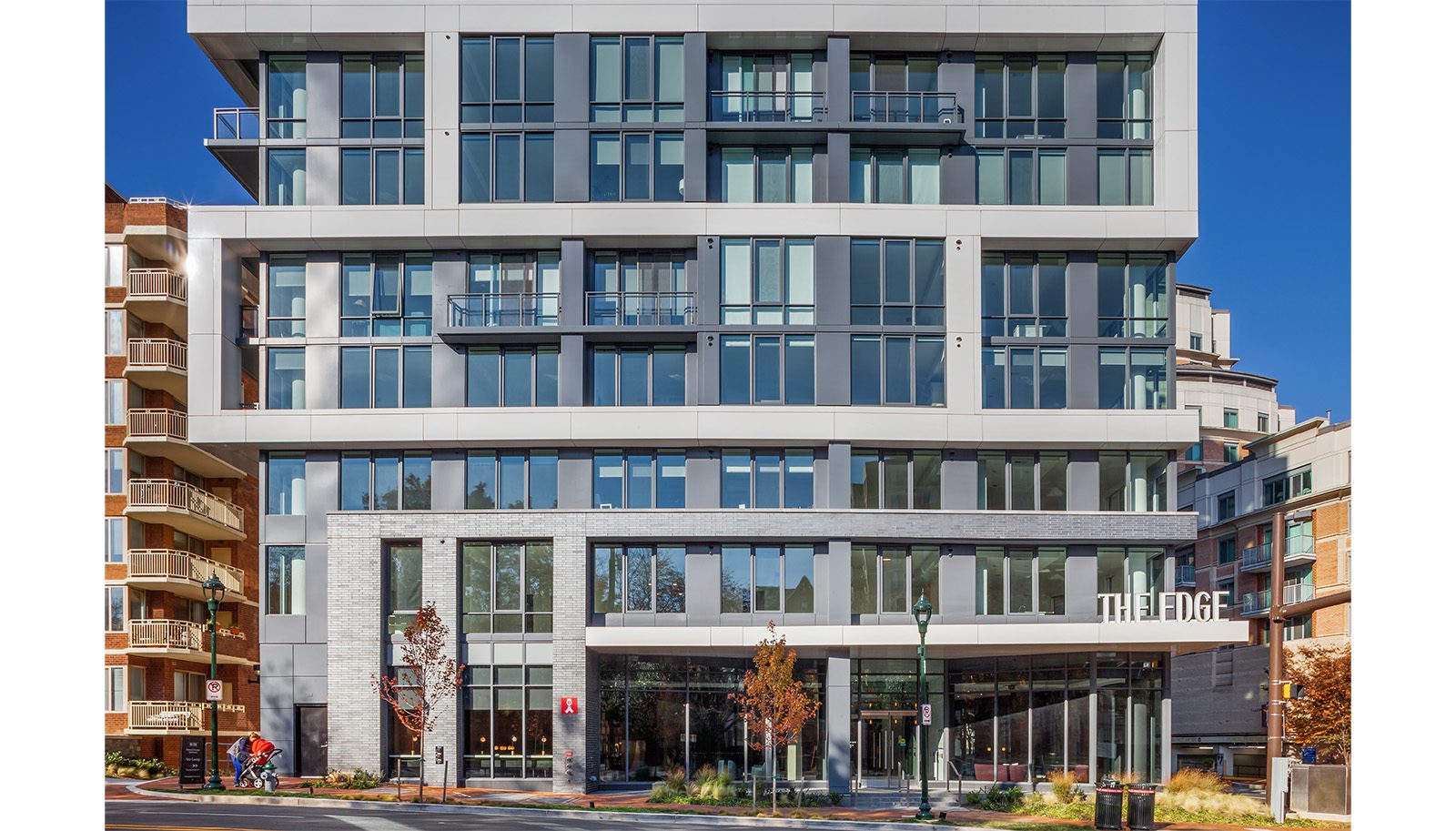 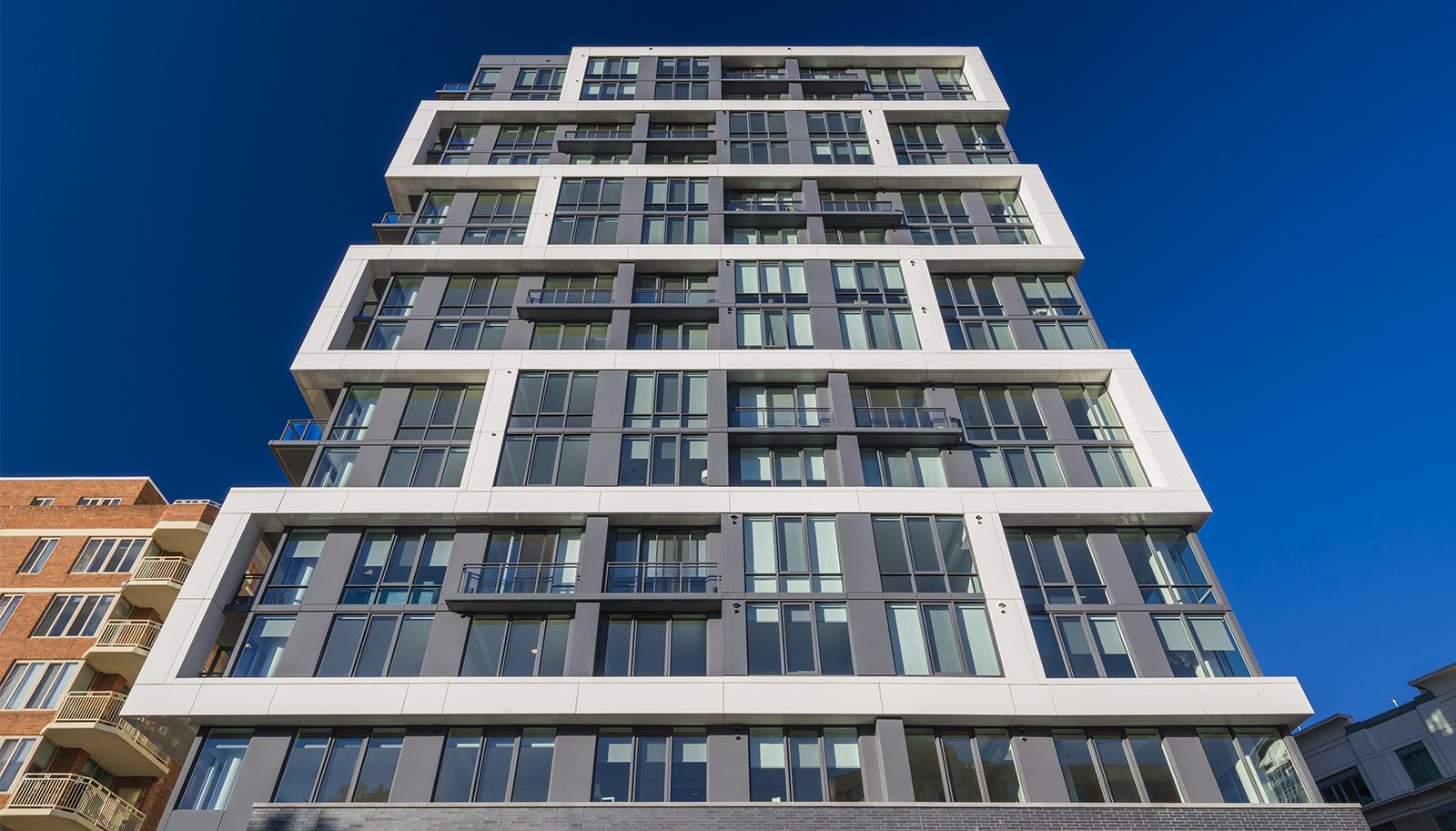 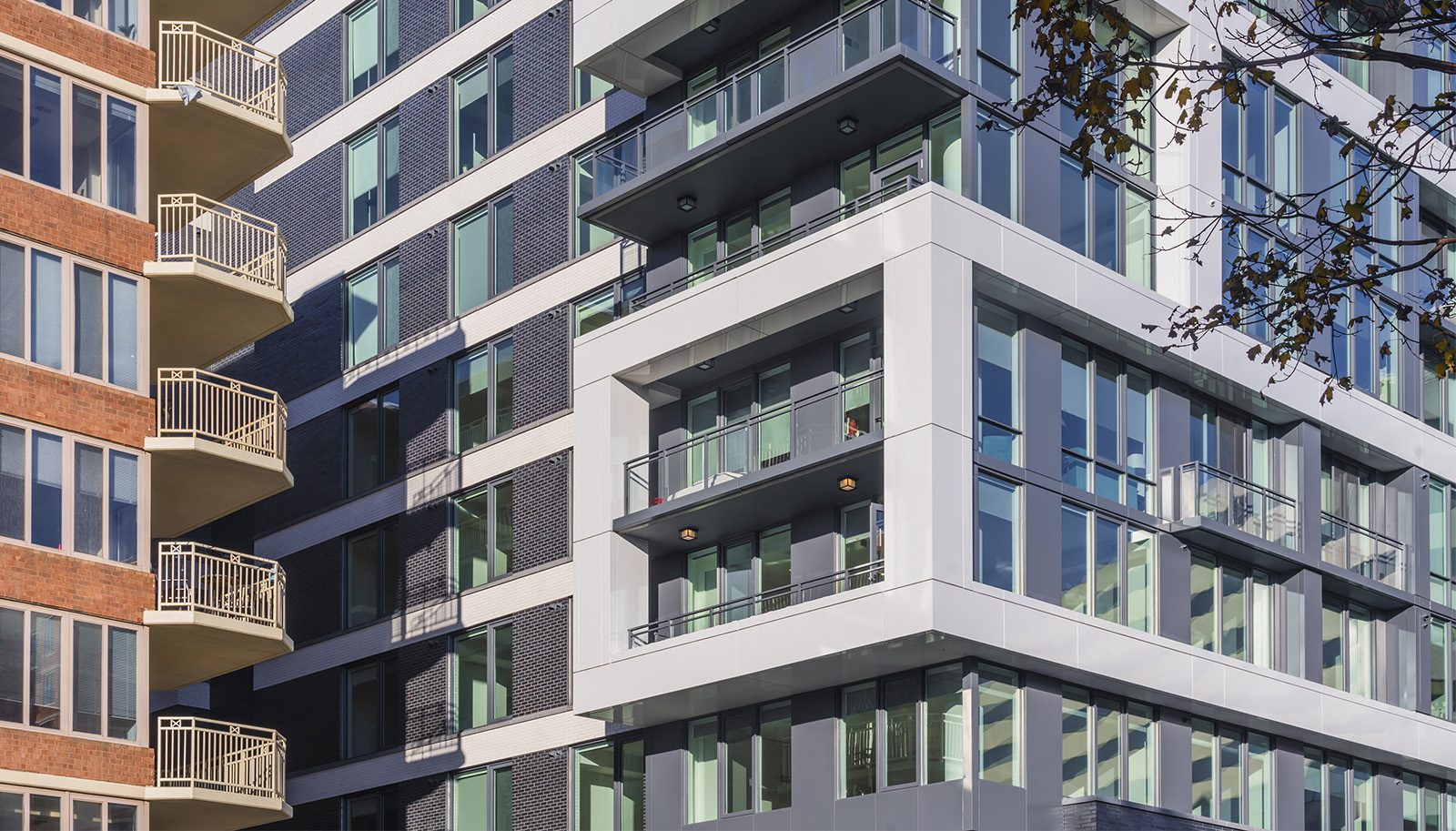 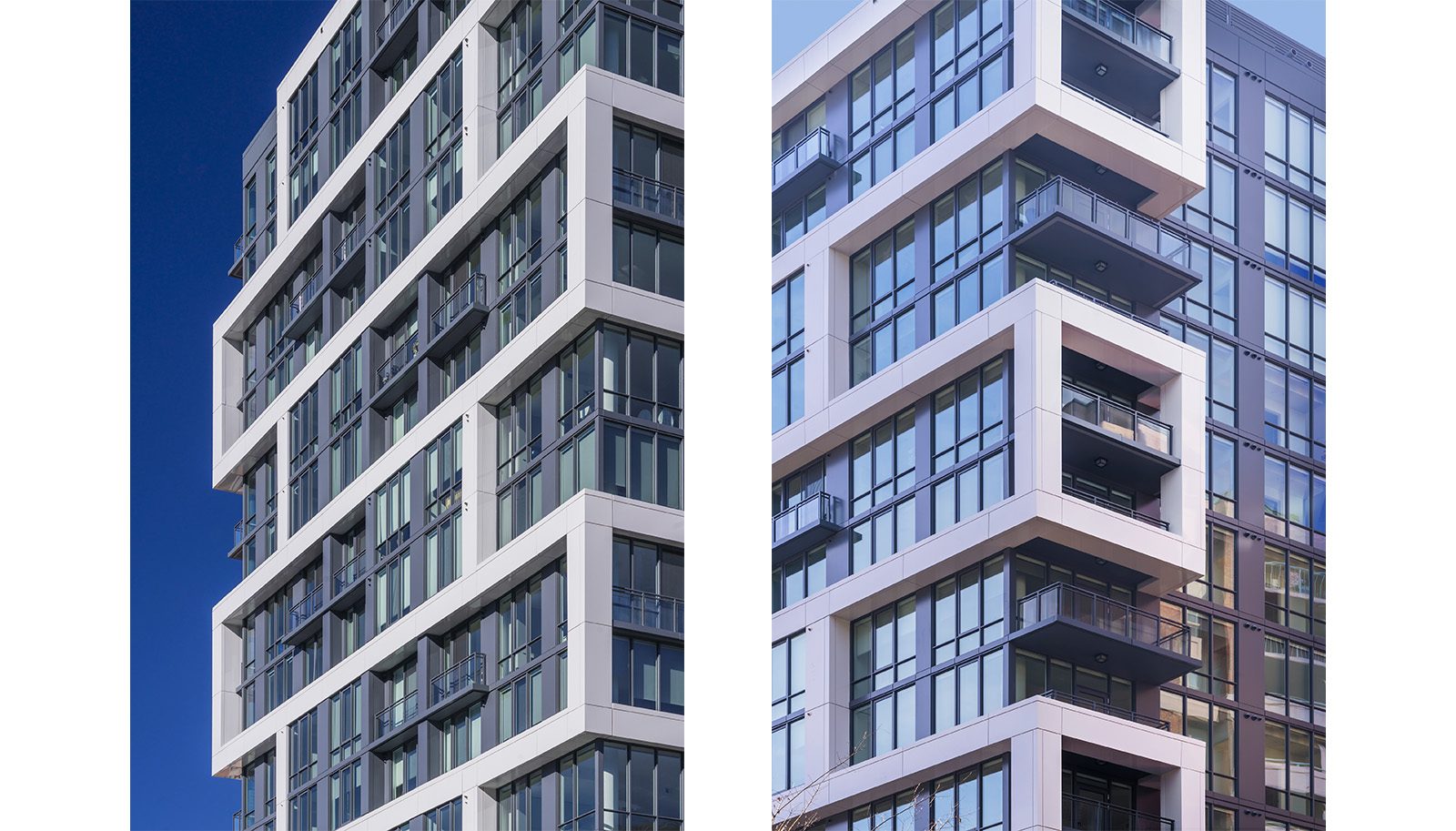 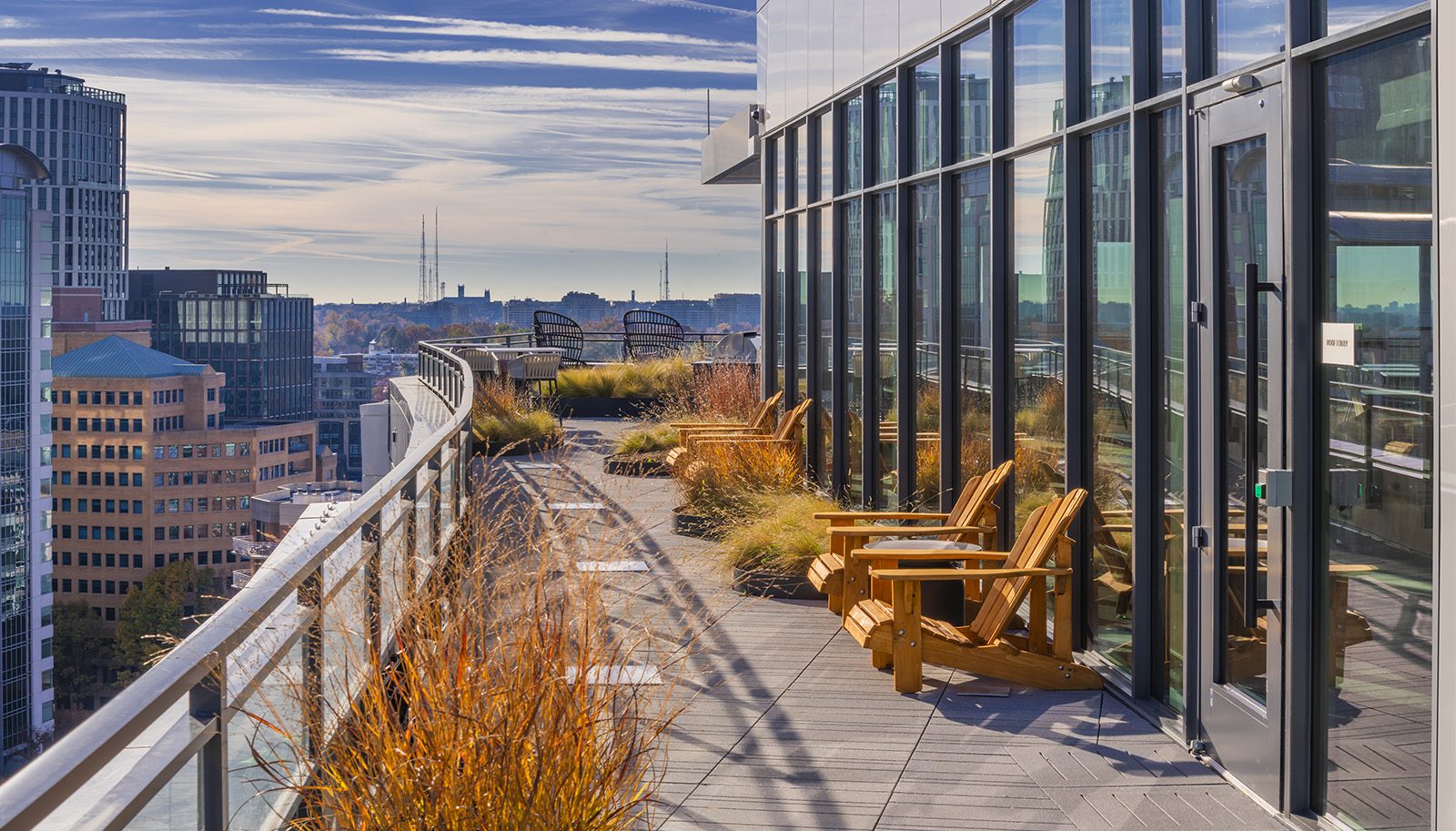 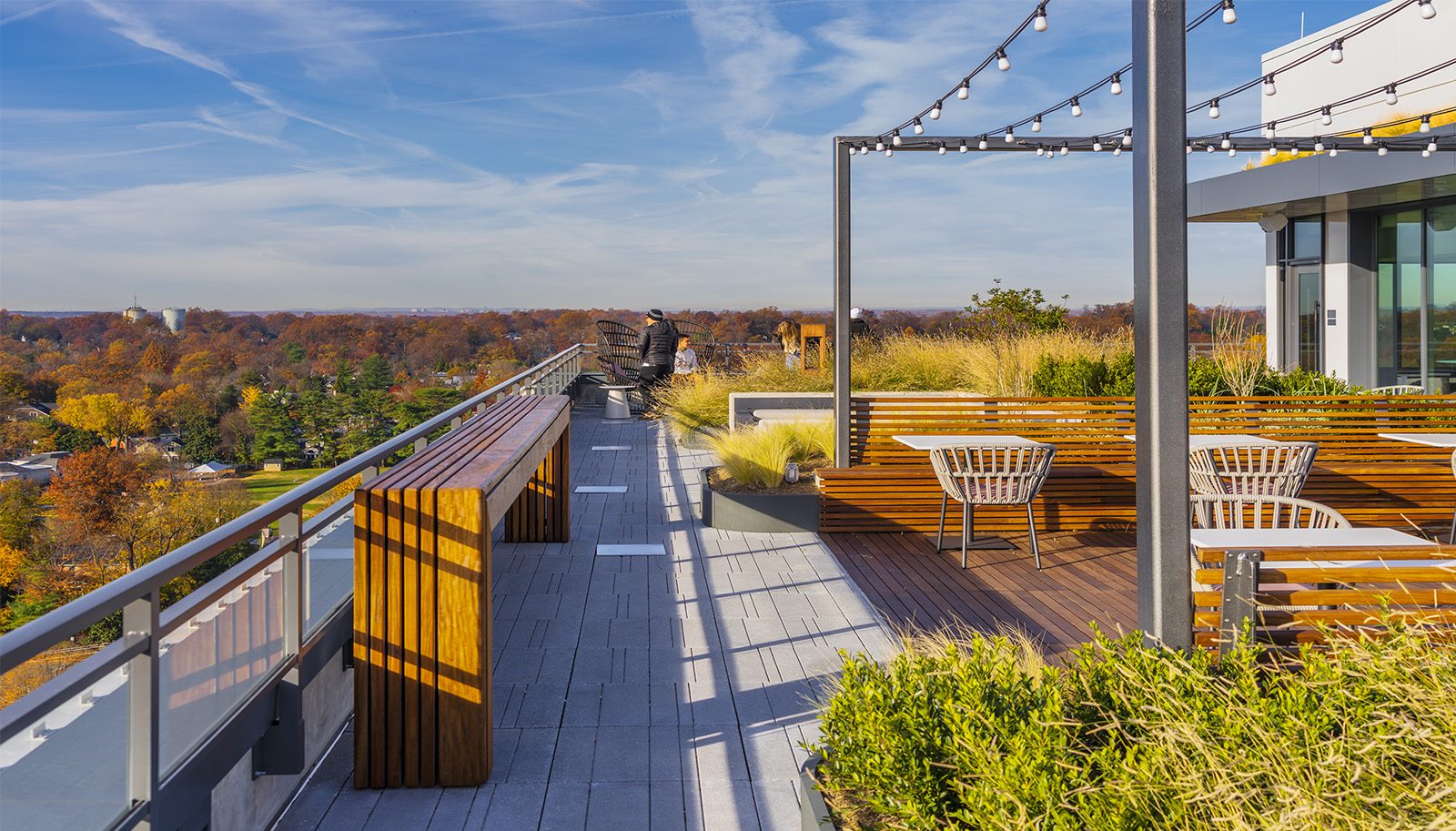 The Edge is a 15-story multifamily tower located on the corner of Edgemoor Lane and Woodmont Avenue in Bethesda, Maryland. The building punctuates an important corner on Woodmont and serves as a vital link between the two commercial areas of the “old” and the “new” in Bethesda; the Woodmont Triangle to the north and Bethesda Row to the south. The public spaces in the building ensure the continuity of activity along Woodmont and maintains the vibrancy of the streetscape.

Programmatically, the building is an extension of the adjacent Edgemont at Bethesda Metro as the amenity spaces are designed to accommodate the residents of both buildings though a physical link between the two. The south-facing entry façade was designed to reinforce the relationship with the neighboring Edgemont building by promoting an Edgemoor presence and address. Yet, The Edge architecturally emphasizes its own identity with distinctive facades comprised of large-scale white frames on a dark background.

In plan, the building design is a response to its immediate context and the unique shape of the site. The building fills out its site while the Woodmont elevation visually continues the curve of Woodmont. The three corners of the building along Woodmont Avenue and Edgemoor Lane are all made prominent for specific reasons. The northeast corner addresses southbound motorists as they travel along the one-way Woodmont Avenue. The Edgemoor and Woodmont corner punctuates this important intersection, and the southwest corner overlooks the front ‘yard’ of the prior Edgemont building. The Edgemont and the Edge, together with the other buildings on the block, define a thru-block public walks that offers an alternative connection in the city. The city is rightly delighted with its many examples of these types of connections.

The Edge was conceived to be the face, front door, and lobby of both buildings. Its expressive character is partly a result of it carrying the load of being the face of the two buildings together. The entry is pushed up to the street and over scaled, the lobby together with public gallery space is generous and open to the streetscape, having the aspect of a public lobby. The entry of the Edgemont, previously accessed via a motor court is pushed back from the street.  The motor court has been replaced with a small public pocket park and rain garden planting beds.  The buildings are linked with a conditioned corridor and small garden. The Edge is not only an addition to the Edgemont, but stands on its own. The amenity programs are shared; the pool of the Edgemont is not duplicated in The Edge, and The Edge offers a Fitness studio, coworking lounge, roof terrace and penthouse dining room, all sized to accommodate both buildings.