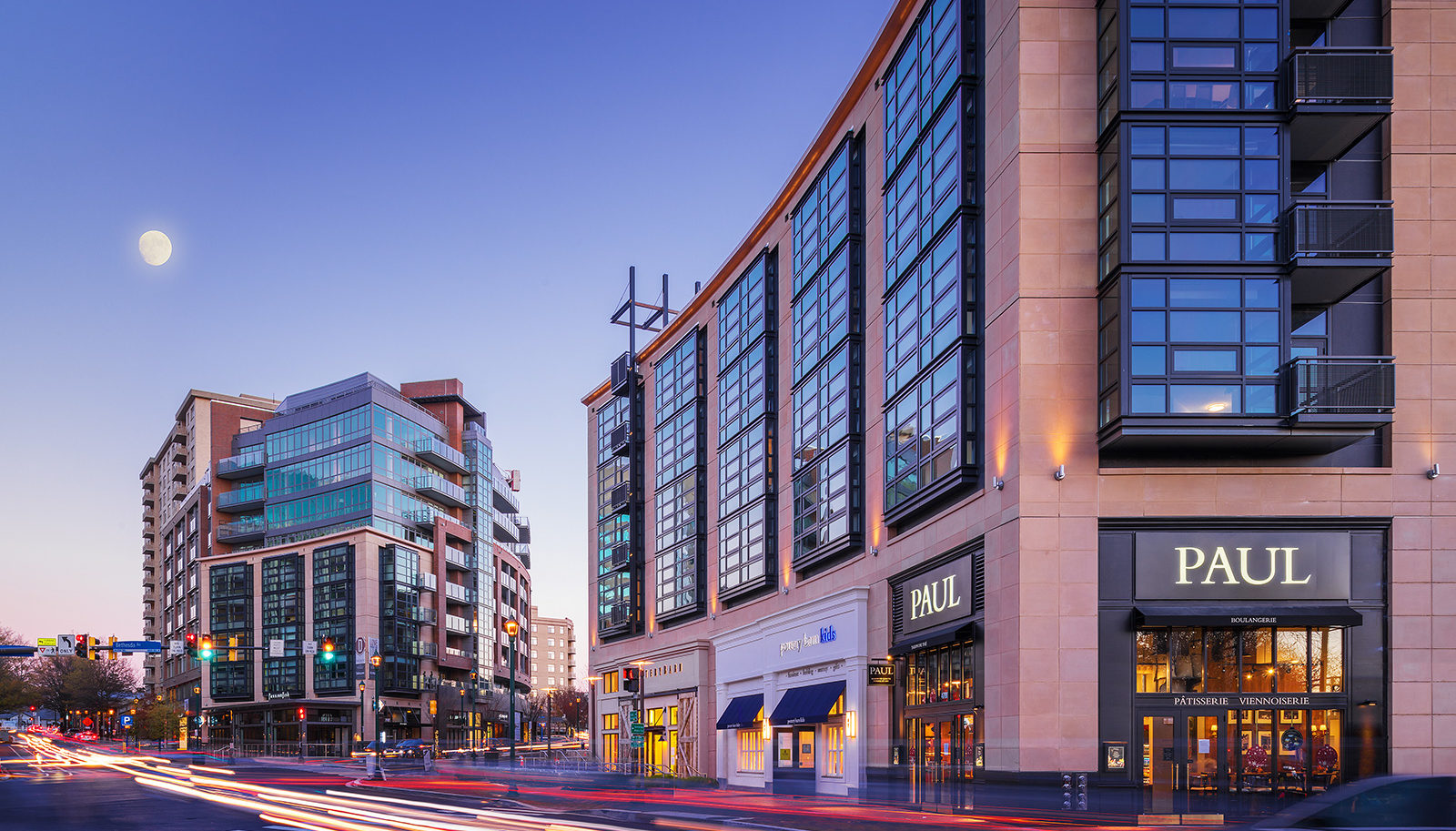 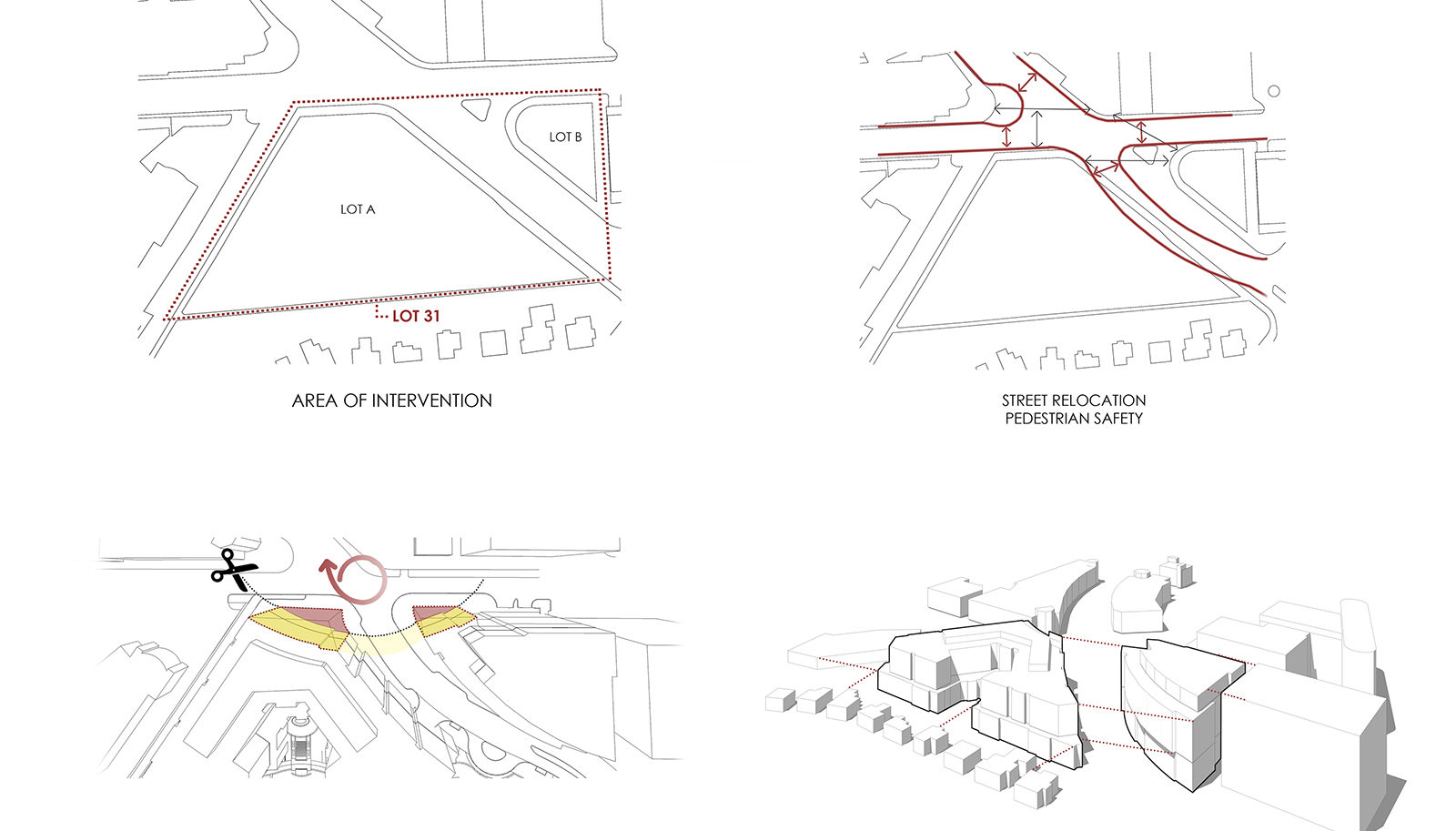 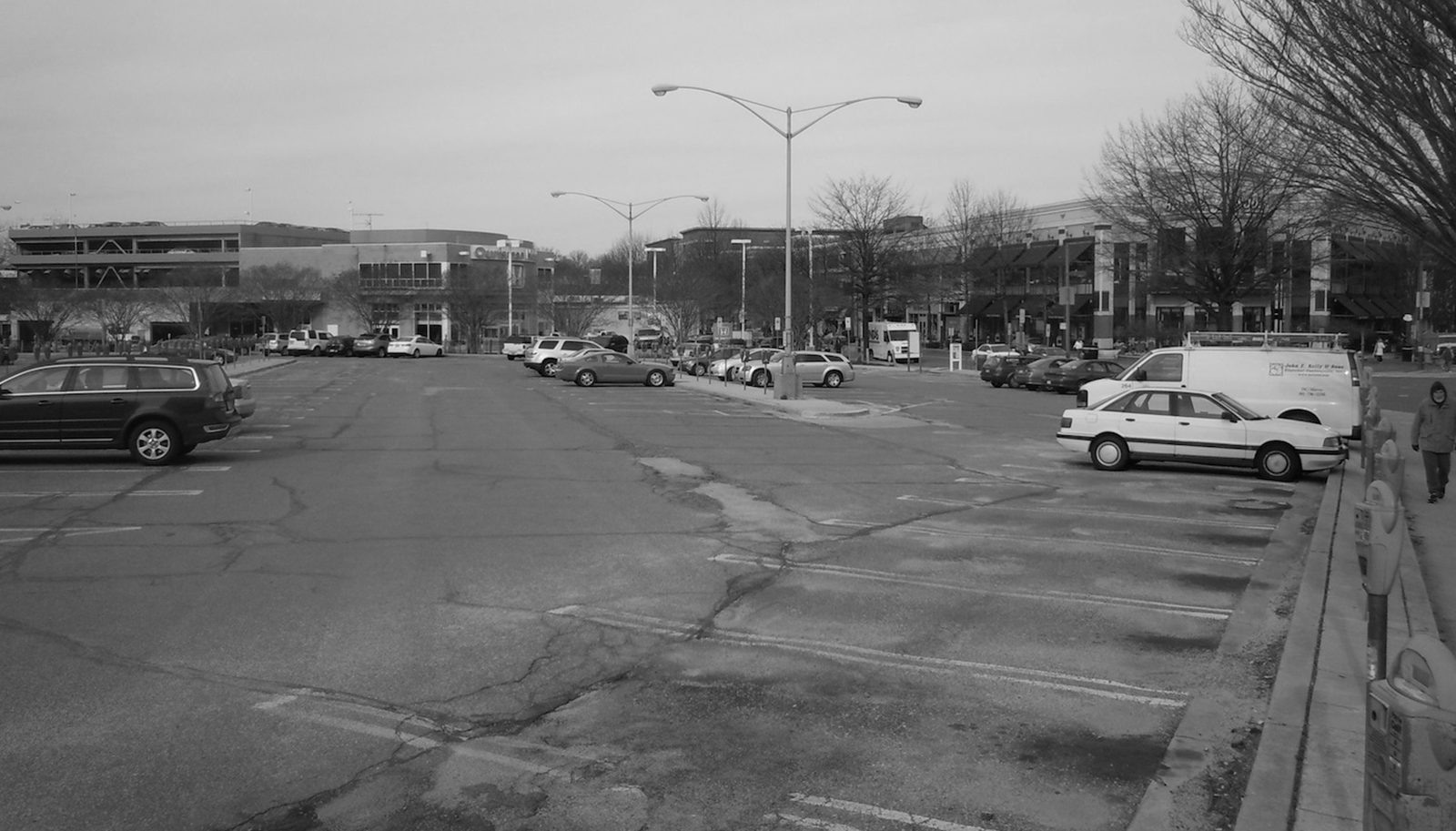 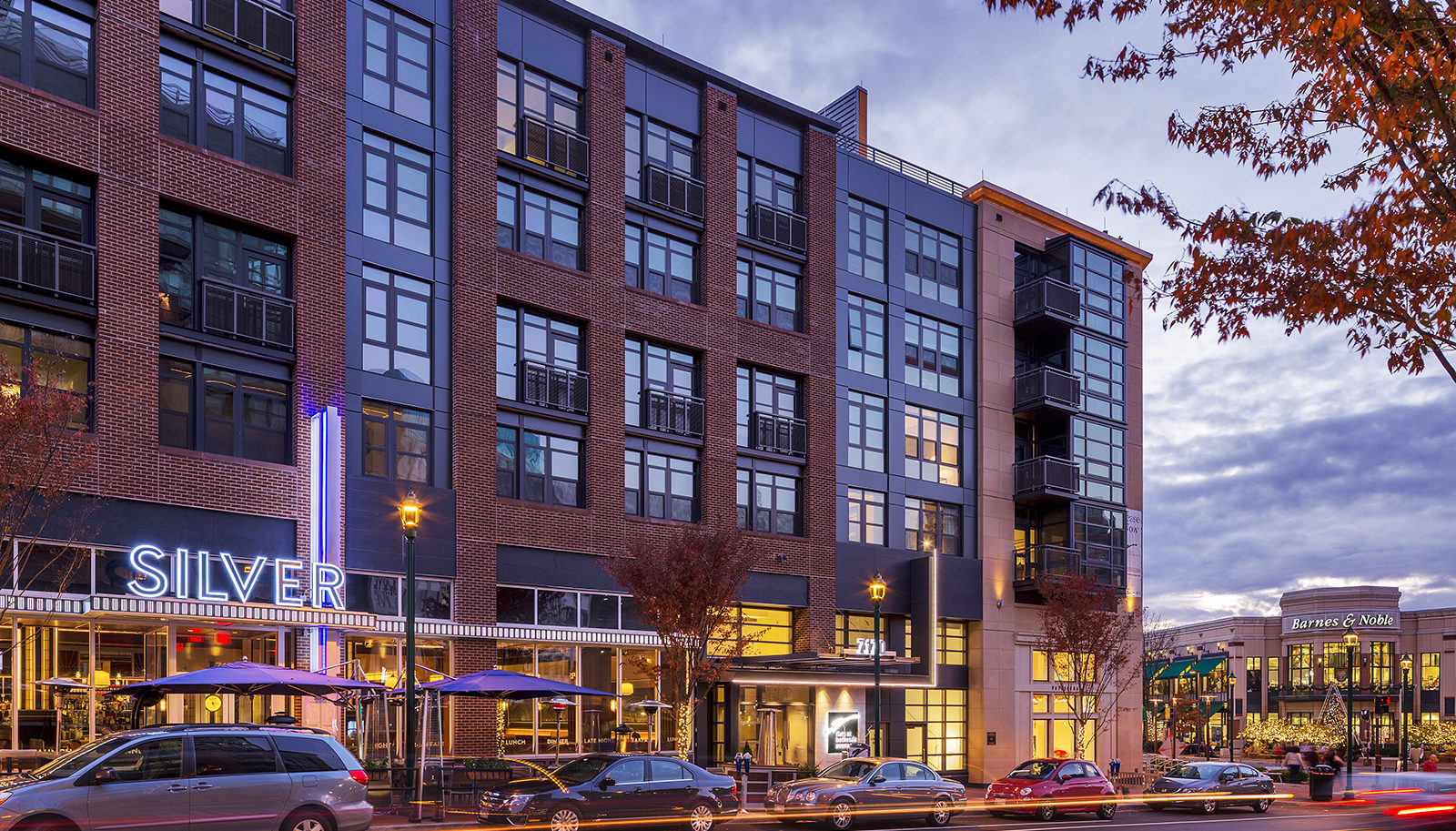 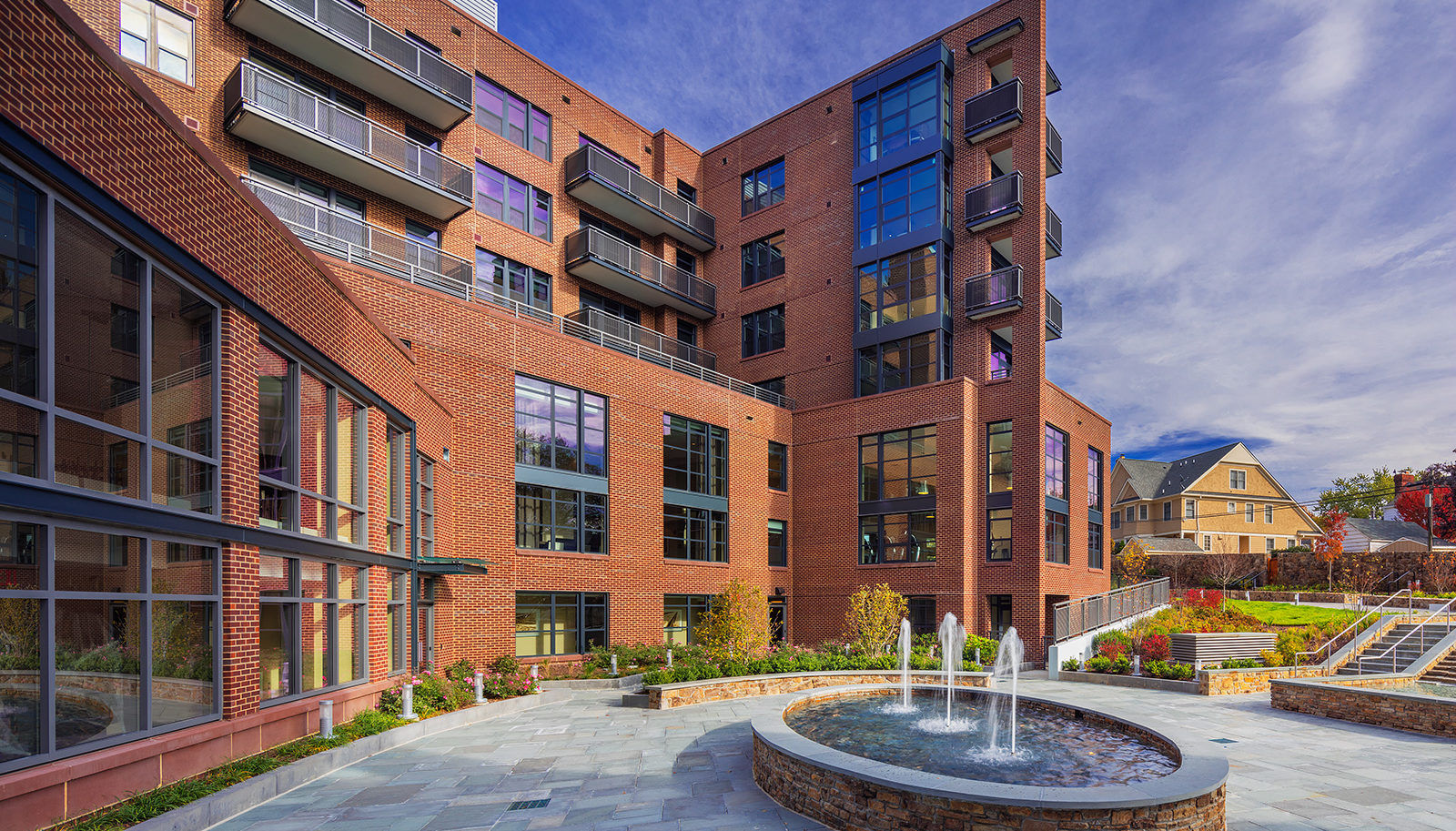 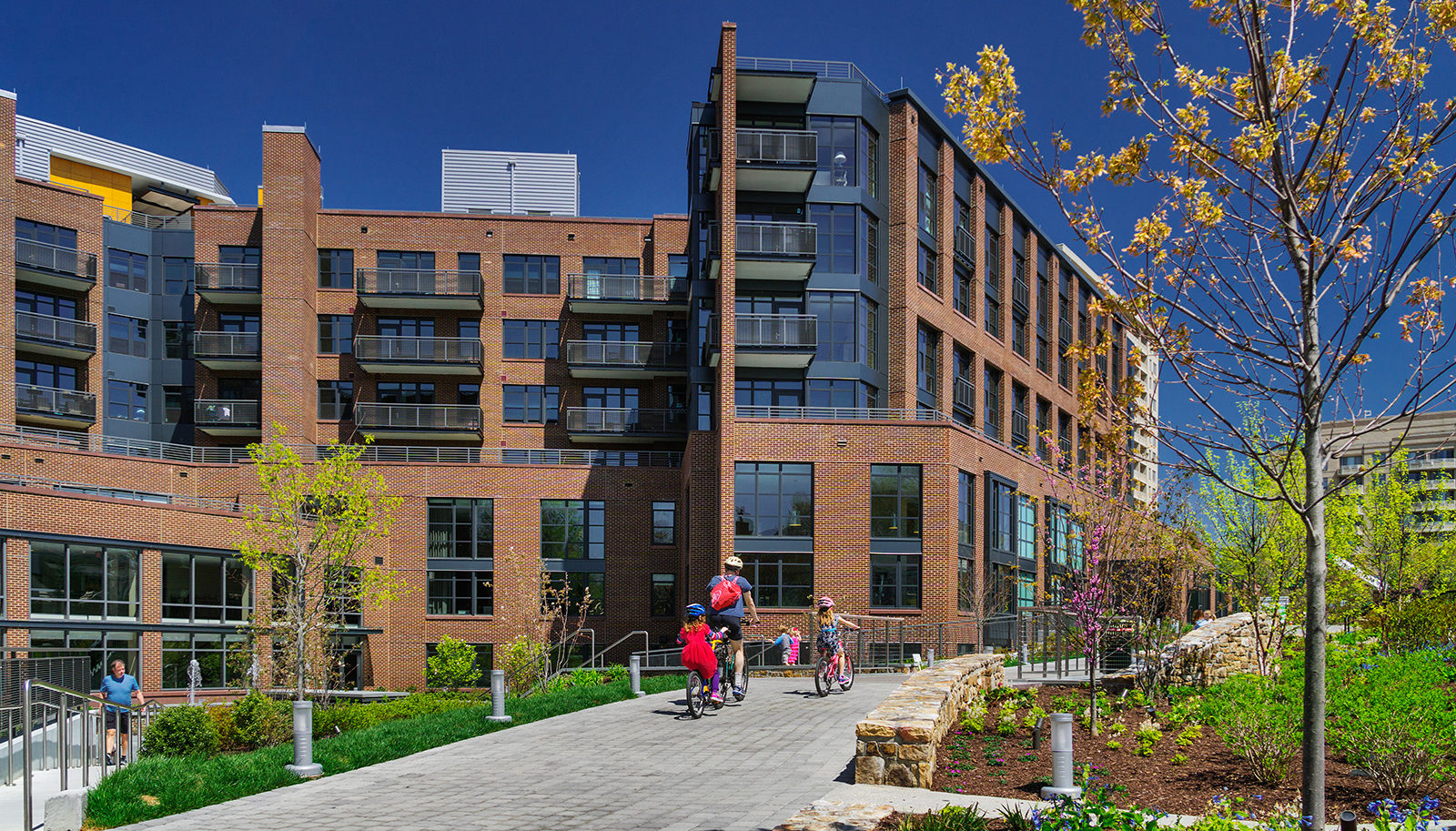 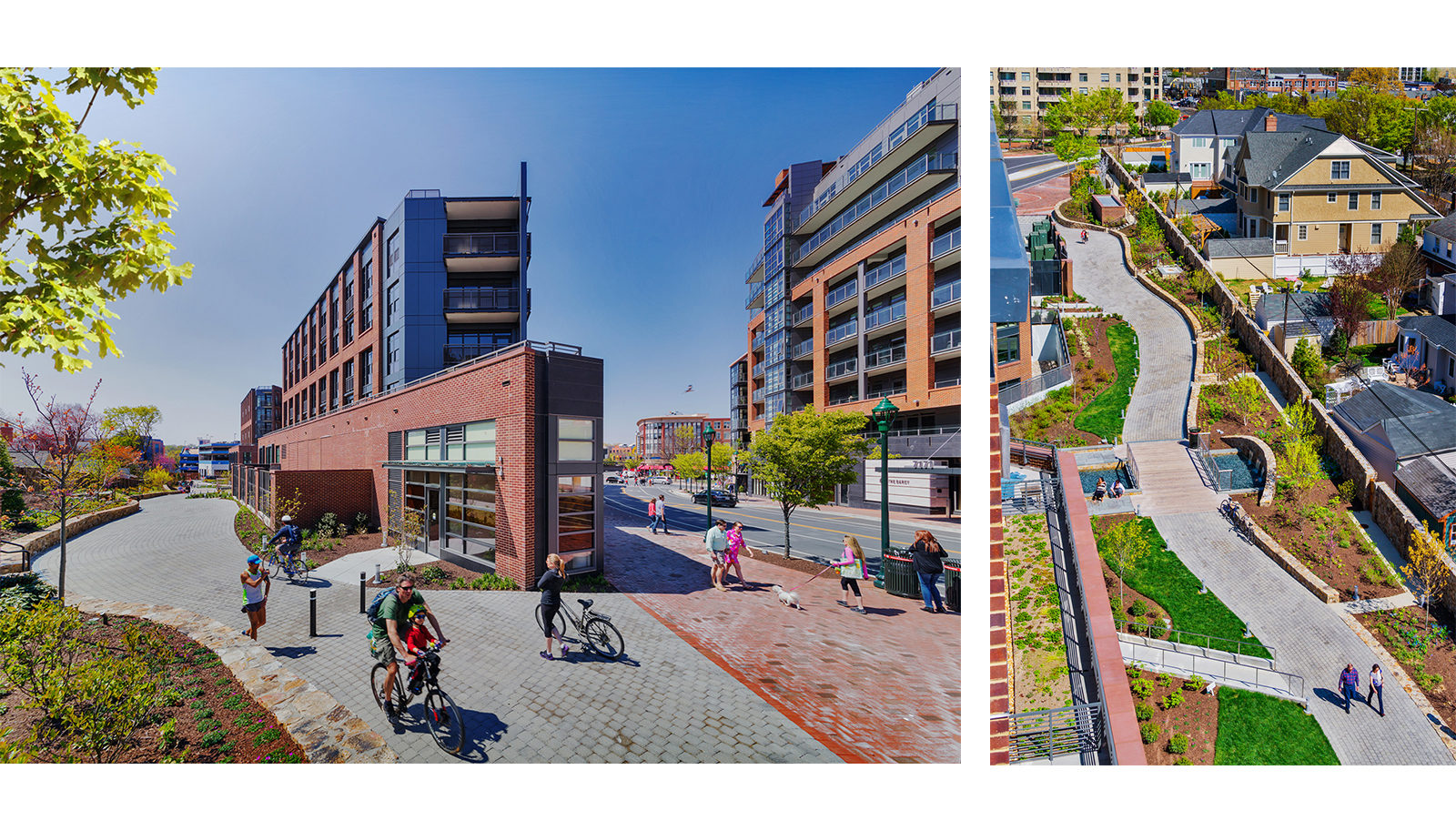 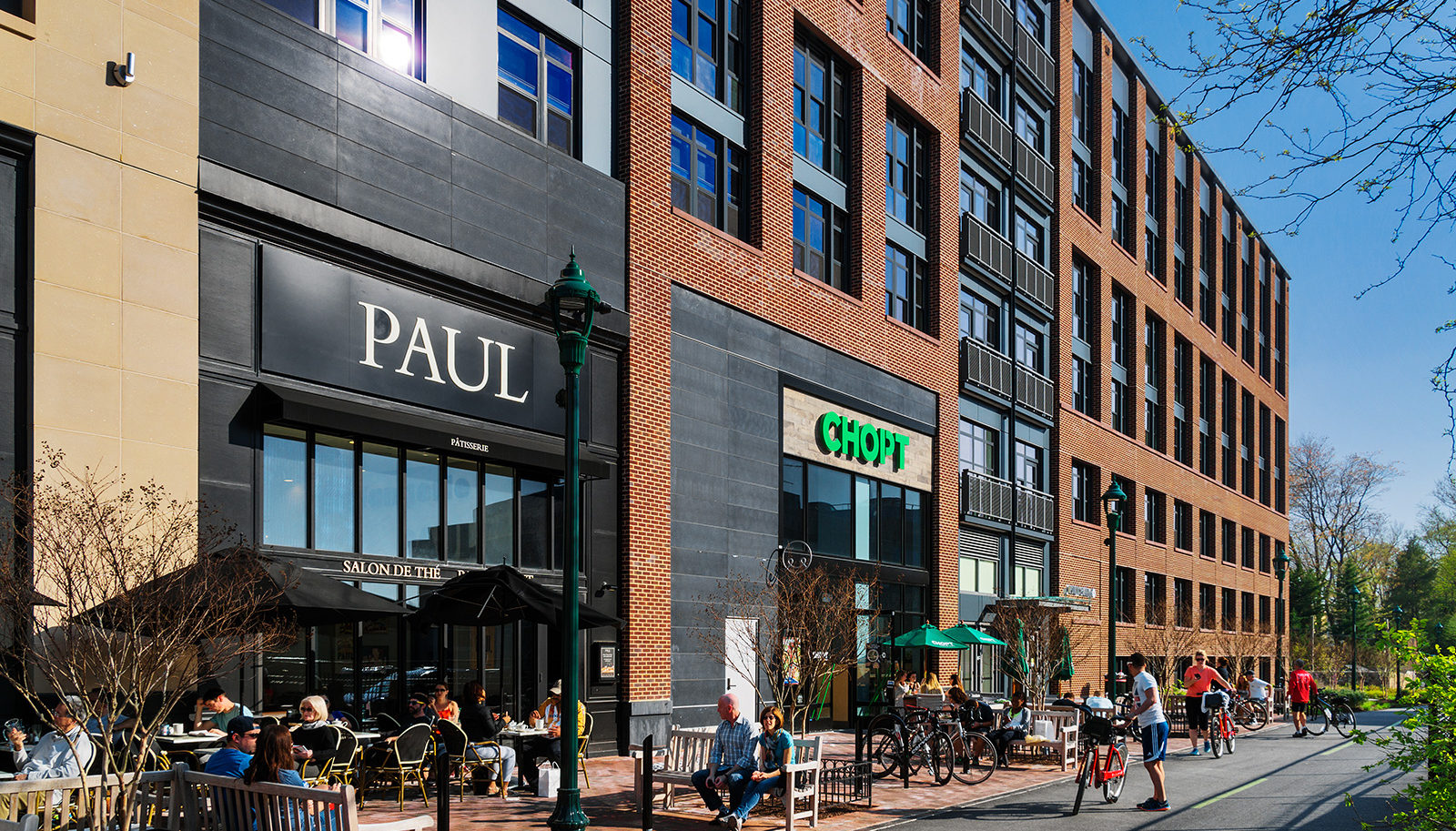 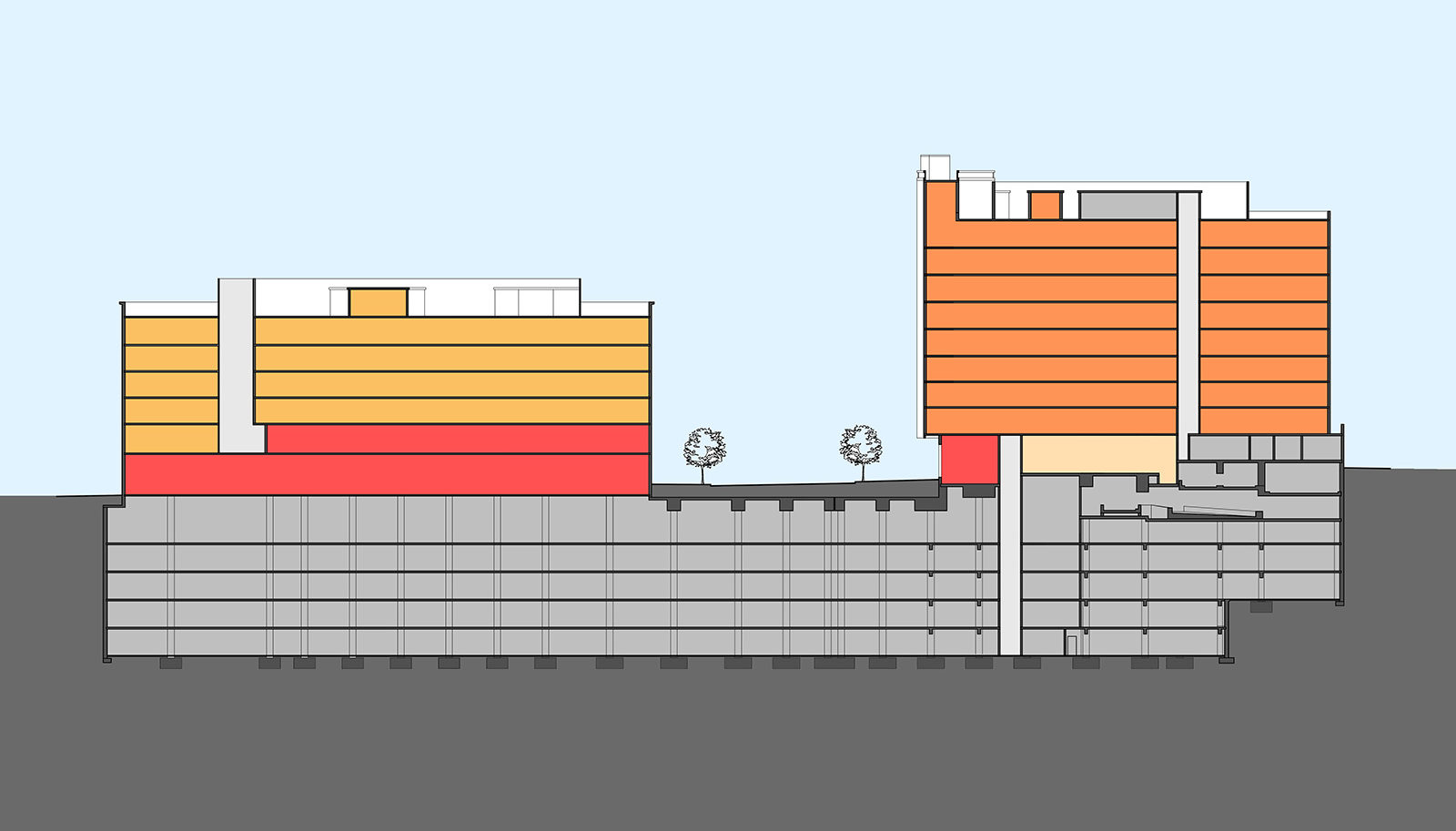 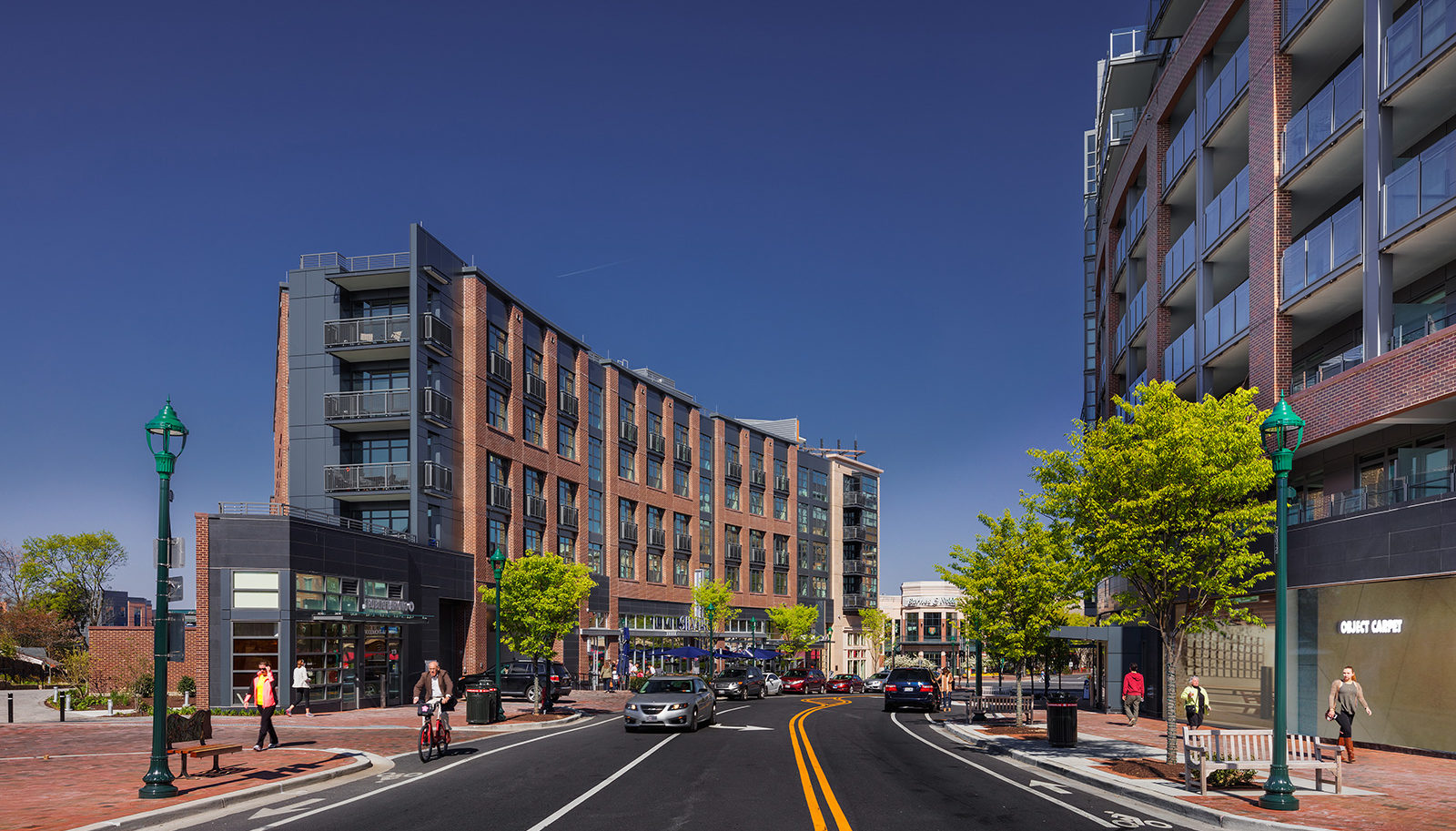 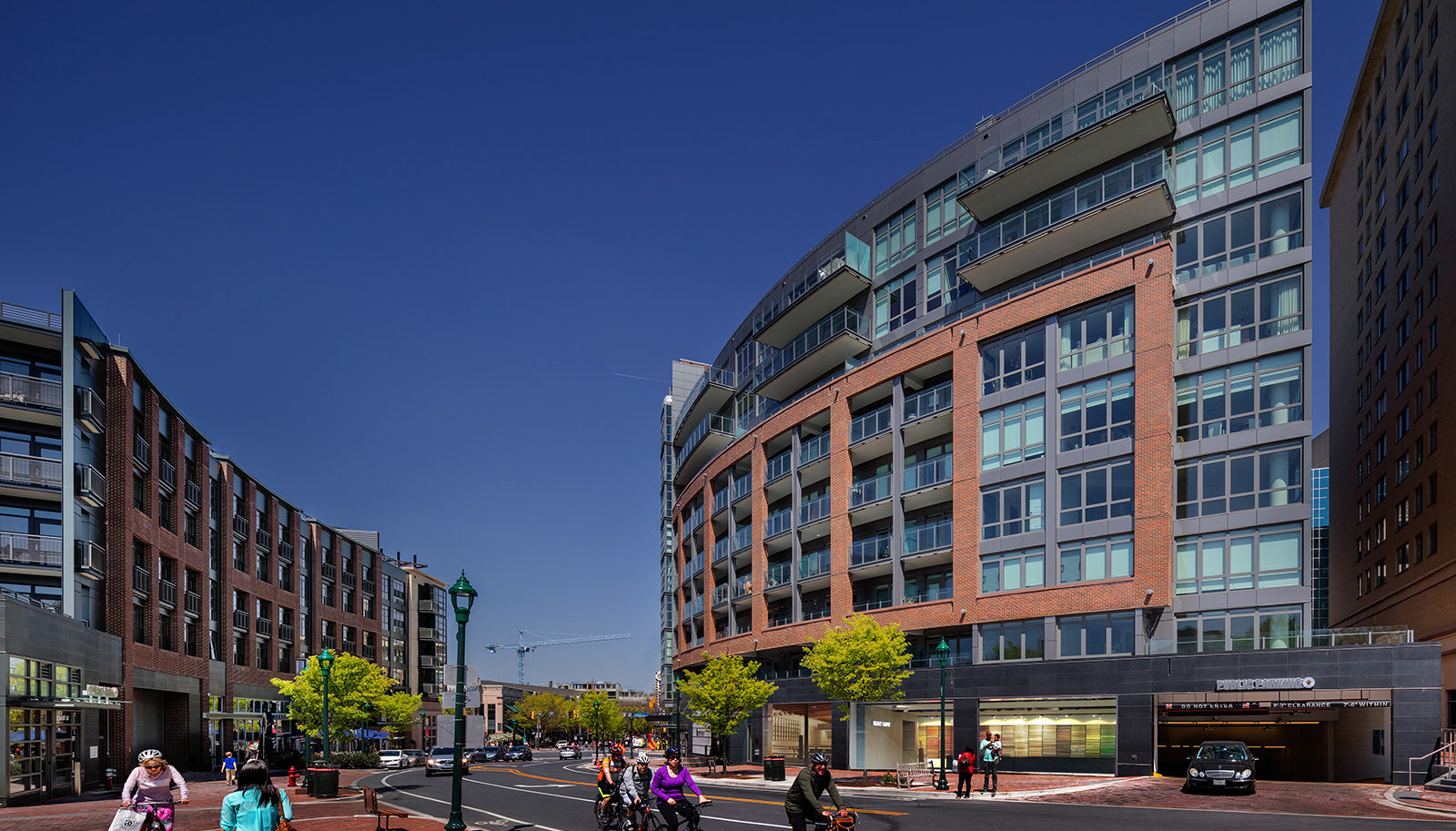 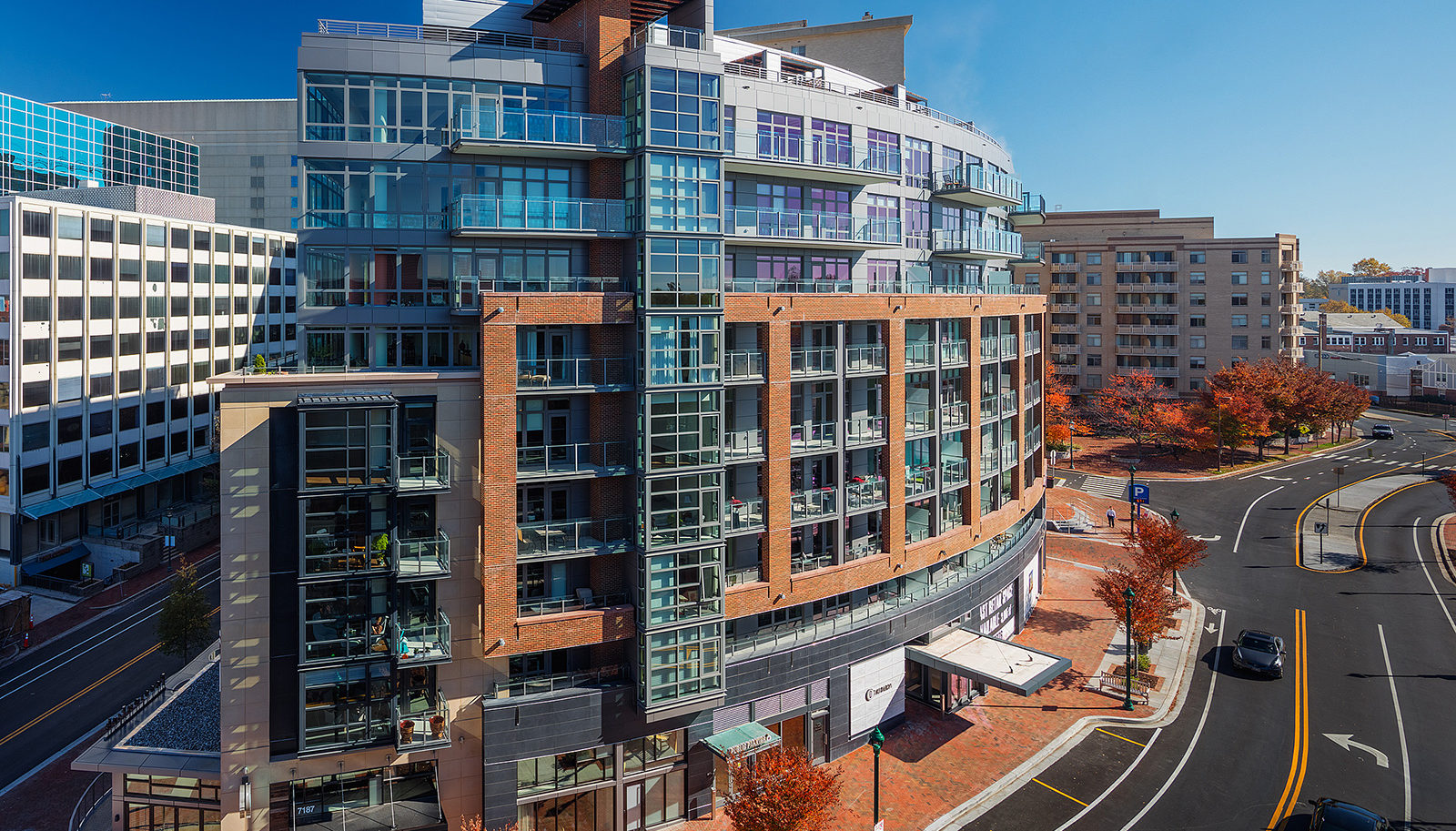 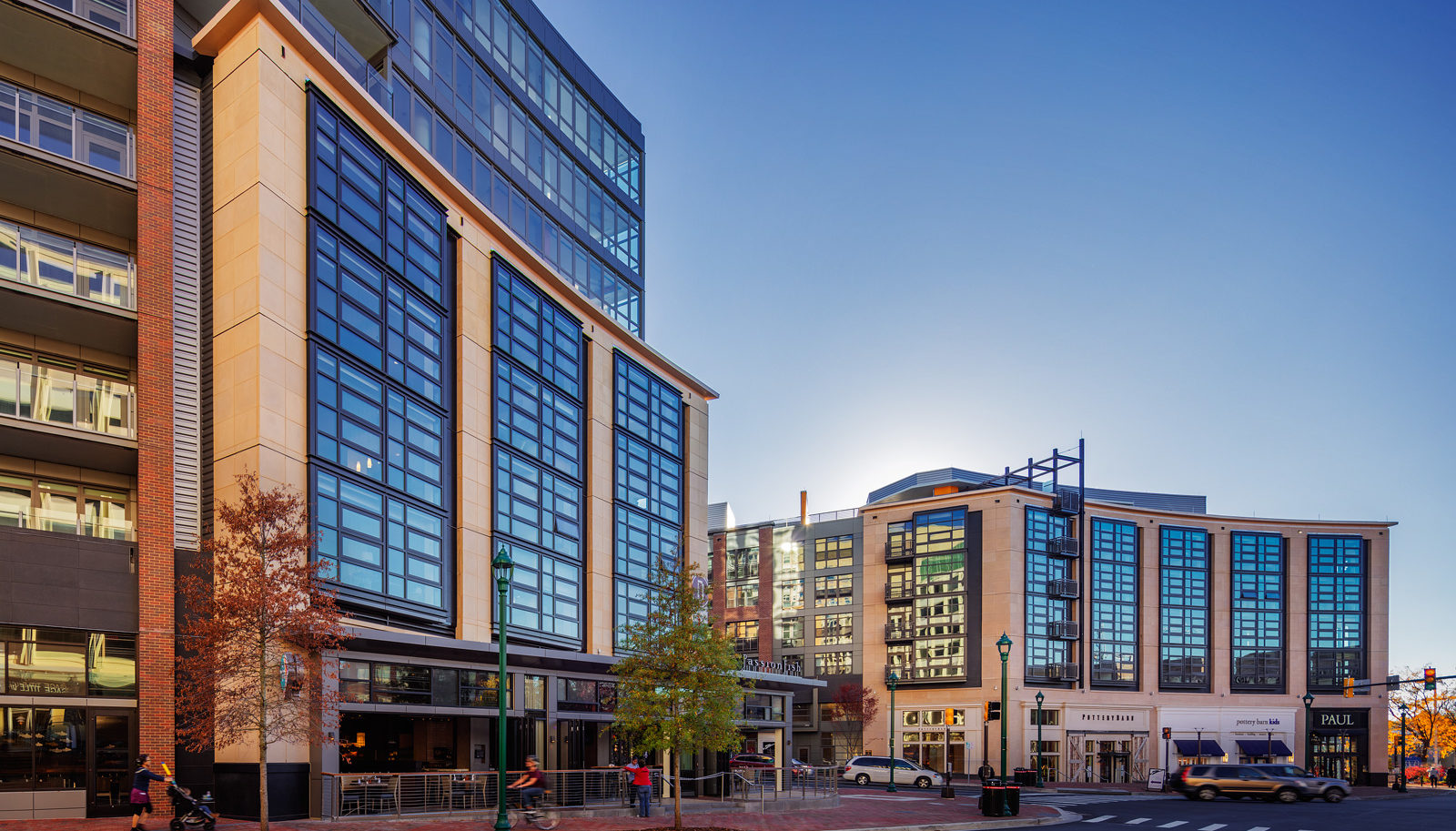 At the corner, The Flats are set back from the newly curved street and a vertical glass tower is introduced as a focal point. Just under 50,000 square feet of in-demand retail open onto the street creating a hub of activity. Cafes with outdoor seating, barn style doors, and sleek store-fronts combine to create an experience that feels as if it has always been part of the Bethesda Row neighborhood.

“The corner of Bethesda and Woodmont Avenues has recently been transformed with the Darcy condo and, across the street, its sibling rental building, The Flats at Bethesda Avenue.”
– The Washington Post

The low-rise building mediates between a block of single family homes and the city; along running trails, modern brick and metal cladding take on the townhouse and then flex industrial muscle on the more urban side.  A quiet spa-like courtyard with fountains leads out to the 11-mile Capitol Crescent Trail that links Bethesda to Georgetown, Silver Spring, and Rockville.

On the main street, a continuous concrete curve connects the two buildings with civic authority; metal and glass bays define the street edge. Around the corner, the high-rise building slides behind a six-story brick frame that curves with the street; the low-rise repeats the frame on the other side. The design is composed of contemporary elements that create an interesting equilibrium between old and new, high and low, glass and brick. The street facades are rigorously modulated with metal and glass bays that bring the scale of the buildings down and create a datum that reads throughout the mixed-use project.

In an effort to accommodate users from all over the county, a designated drop-off circle was designed so that vehicles, particularly those with top-mounted bicycles, could offload at the trail head before entering the garage. A bicycle elevator was included that accesses the trail head directly.

Celebrating One of the Busiest Trails in the Nation

A new trail connection was created to further link residents and the surrounding neighborhood to the adjacent Capitol Crescent Trail. The trail is heavily used by county residents and commuters; a recent survey by The Maryland National Capitol Park and Planning Commission shows that the trail is one of the most widely used in the Nation with hourly users that can exceed 500 people at peak times. The study also showed that the trailhead adjacent to Lot 31 is the trail’s most frequent drop-off point.

“The widening of the Capital Crescent Trail and associated improvements to the local park and active transportation space underscore the value that a trail can create in enlivening a local community and serving as a transportation corridor while also supporting residential and retail development projects.”
– Urban Land Institute, Active Transportation and Real Estate, The Next Frontier

Downtown Bethesda is a walkable urban village that has become a shopping and dining mecca for the more suburban neighborhoods in Montgomery County. Visitors often come and spend the better part of a day or evening on foot enjoying the retail and   restaurant amenities. Additionally, the Capital Crescent Trail links Bethesda to Downtown DC and is heavily used for commuting and recreation by residents throughout the county. The design team was challenged to add extensive parking and enhance the pedestrian experience while accommodating automobiles and cyclists. A solution was found in creating Montgomery County’s first underground parking lot with more than three times the public parking previously available. It was no easy feat— the complexity of design and construction were unparalleled with an underground garage structure with over 60’ column bays and 6’ deep transfer beams and a reconstructed Woodmont Avenue— which in some locations is a bridge-like structure over the garage.

Improving and Enriching the Pedestrian Experience

The project bridges the intersection of Woodmont and Bethesda Avenue, a very busy intersection for both automobiles and pedestrians. In the planning phase a camera was mounted to monitor and identify pedestrian challenges. The design team used this information as an opportunity to make improvements for the overall community and to ensure a safe experience for residents. The design restructured Woodmont Avenue with a graceful curve that creates a more pedestrian friendly urban core and reduces the pedestrian crosswalks by half.