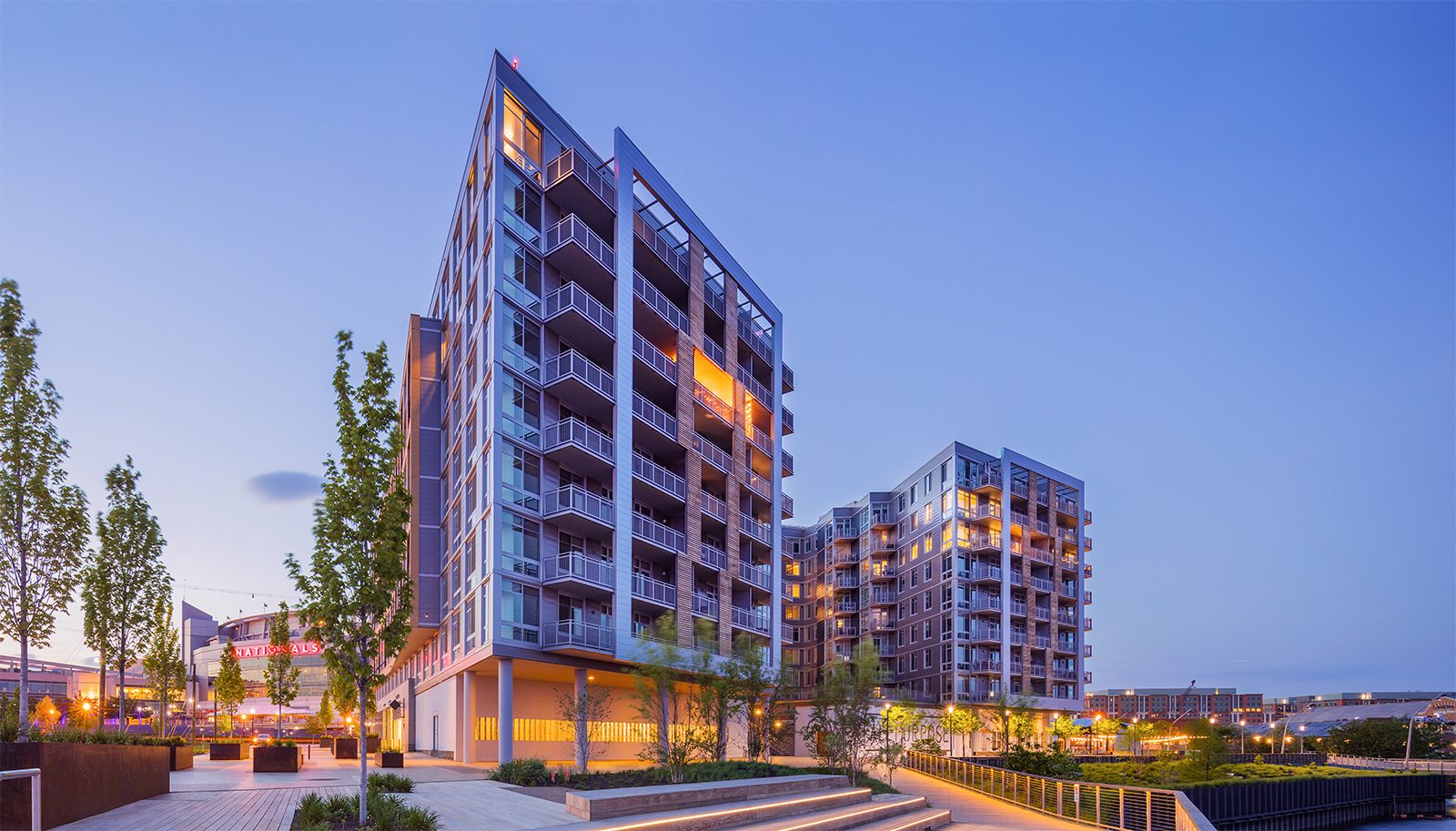 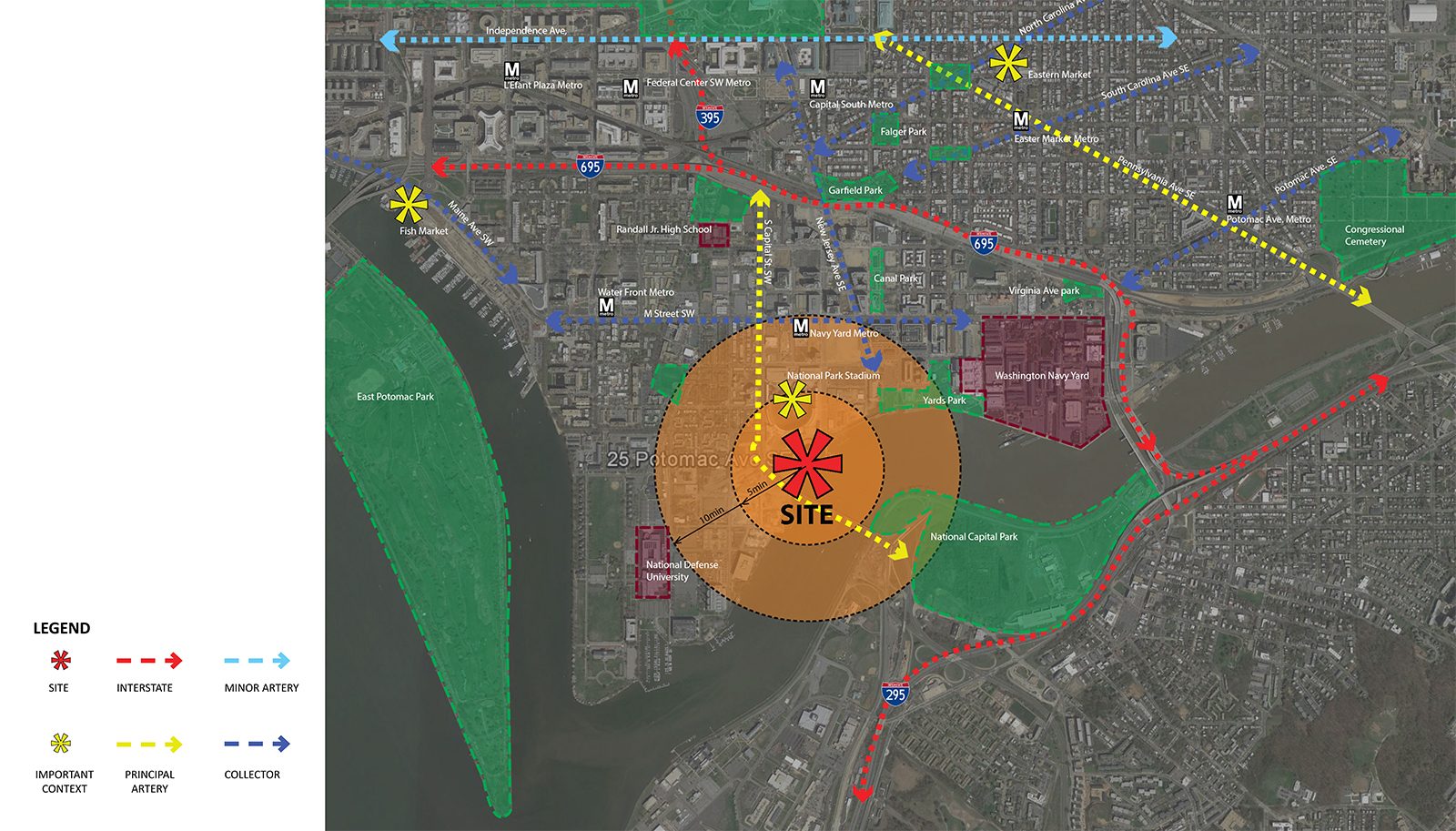 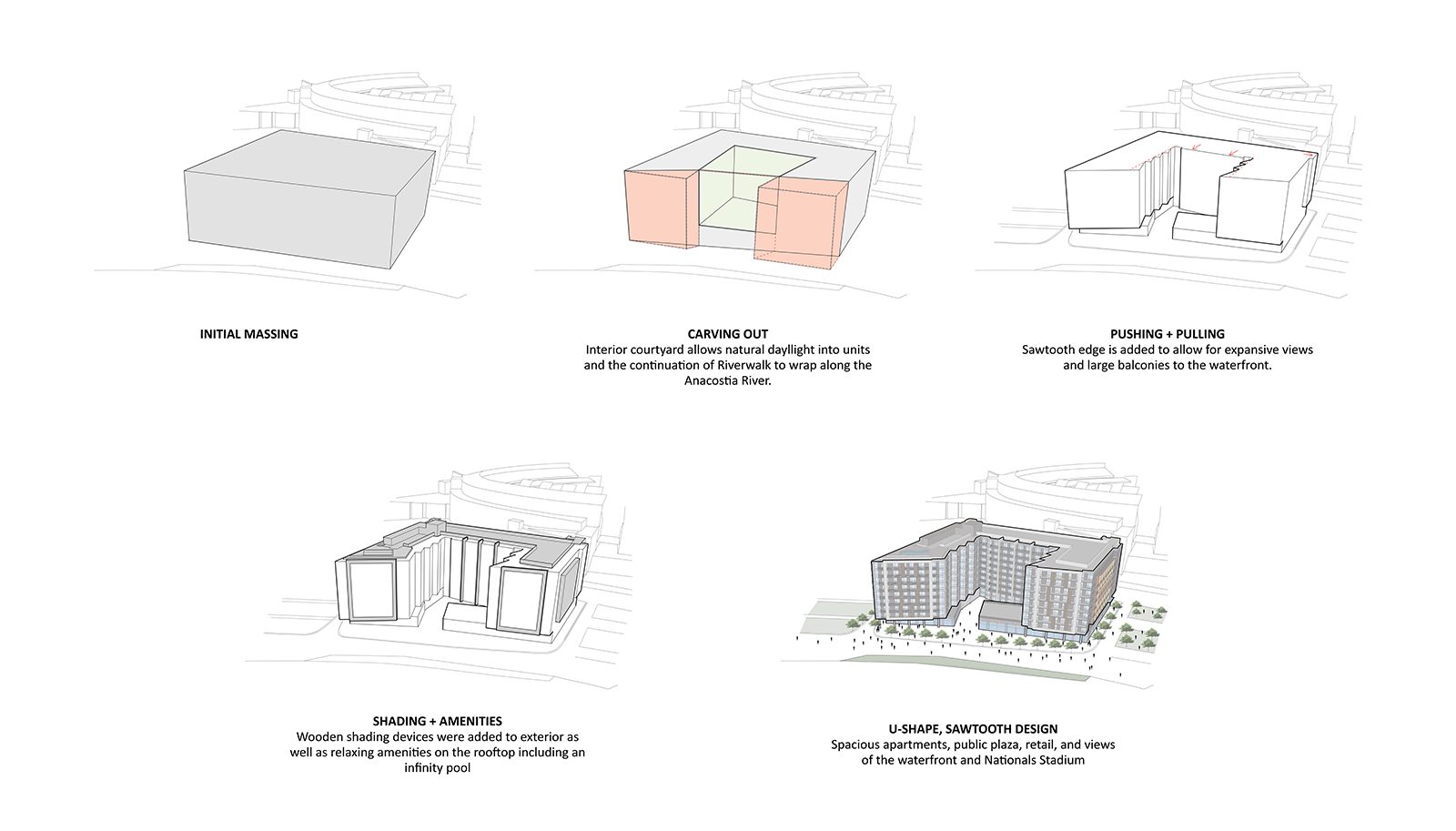 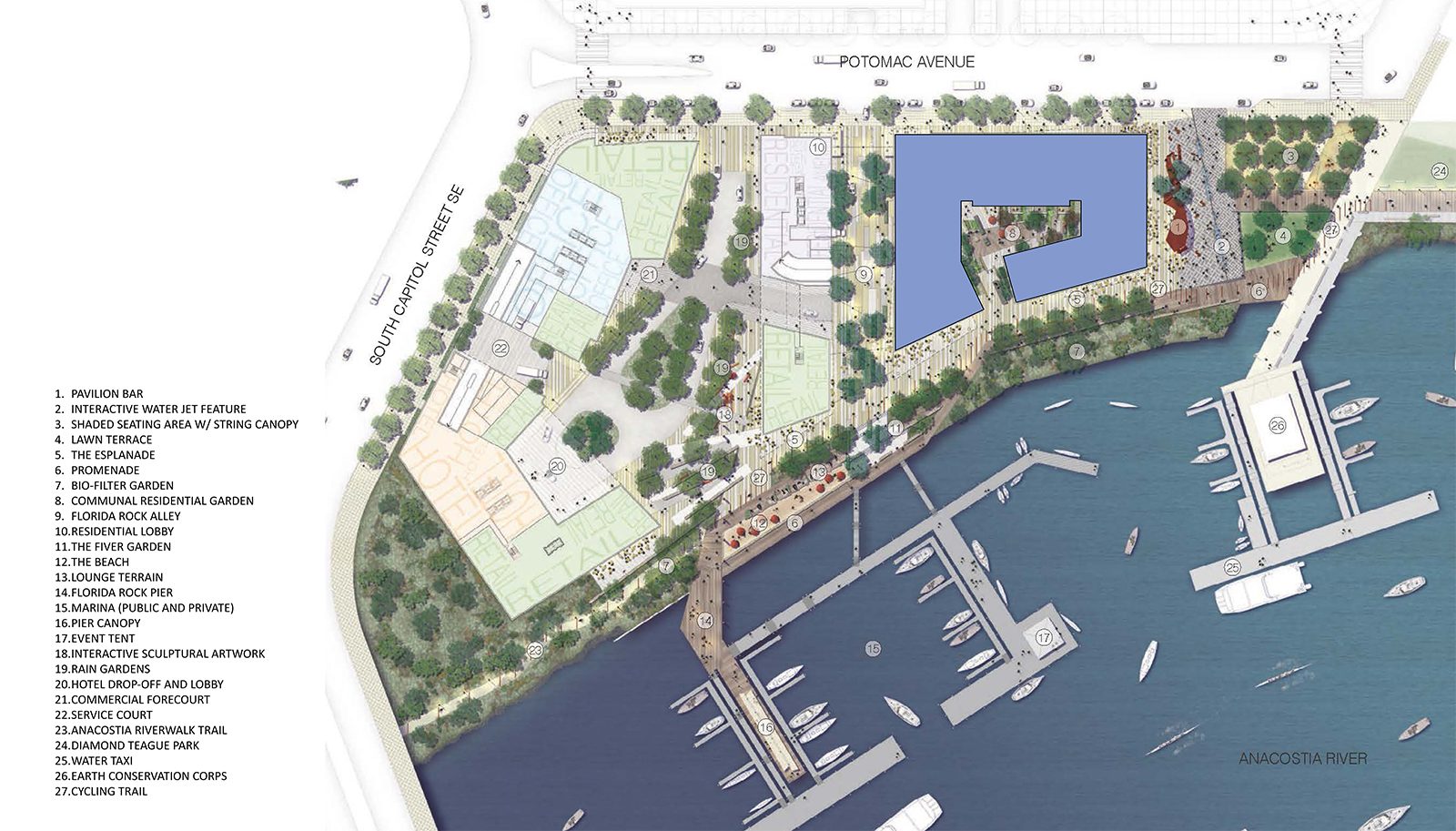 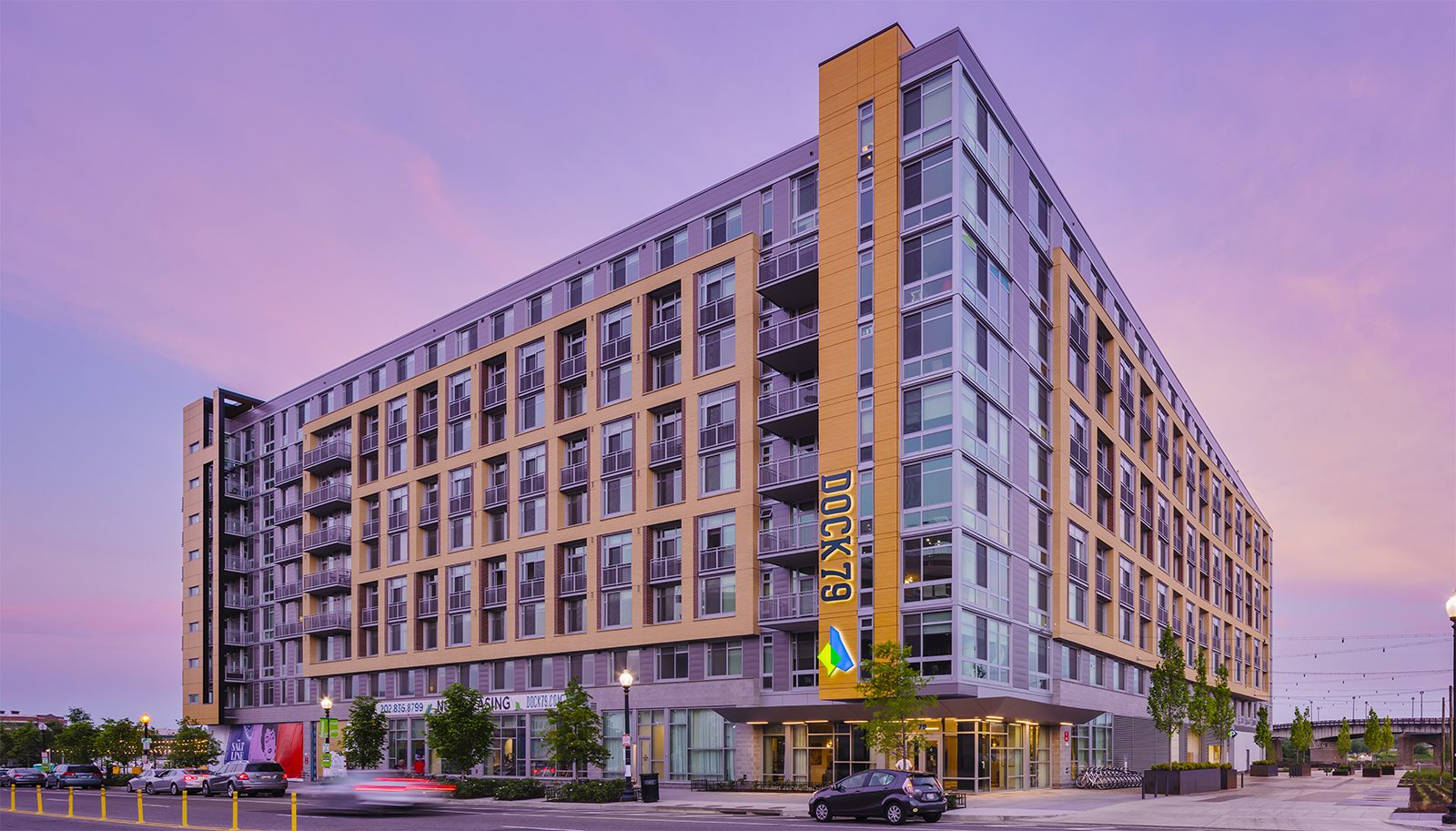 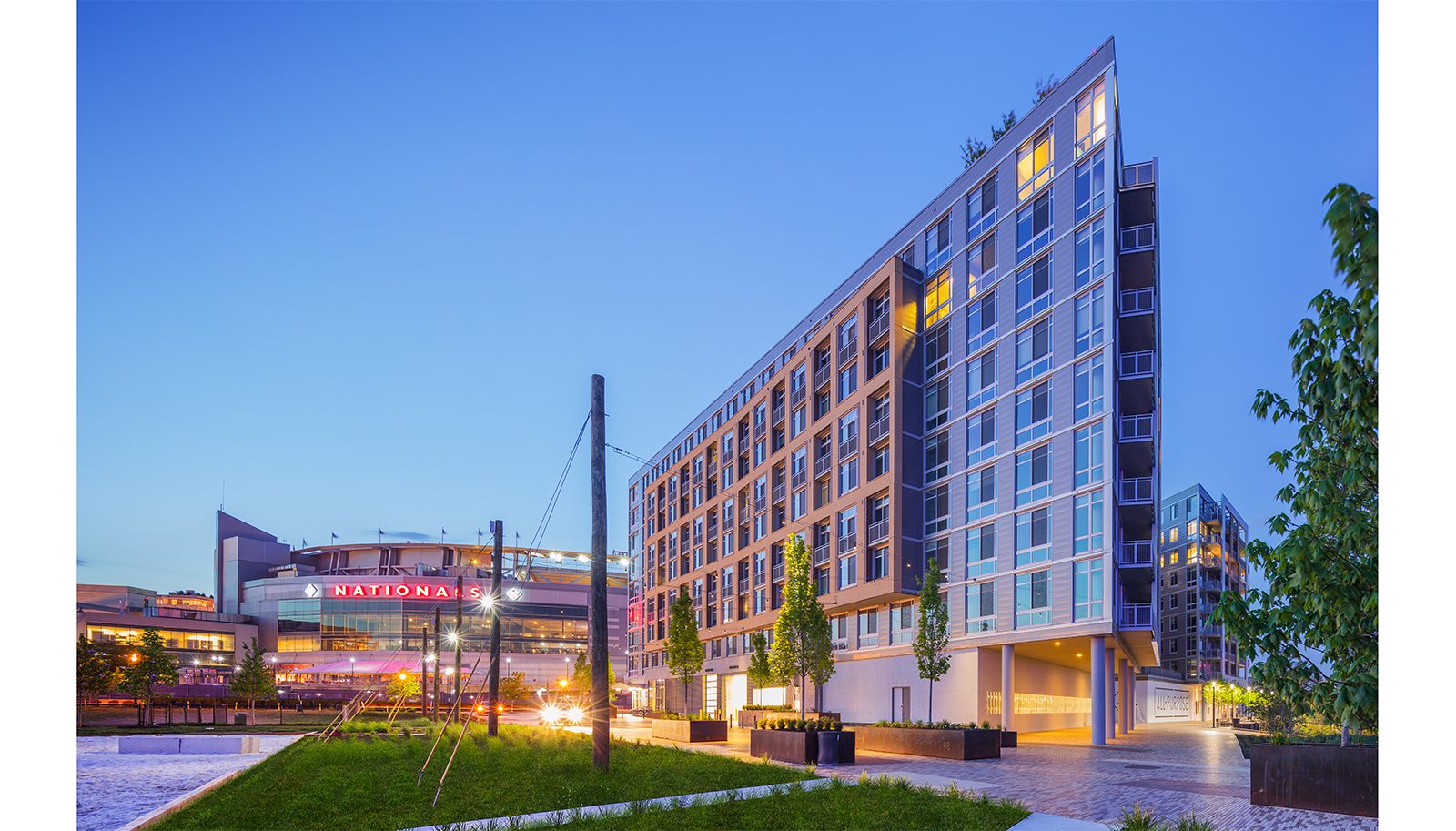 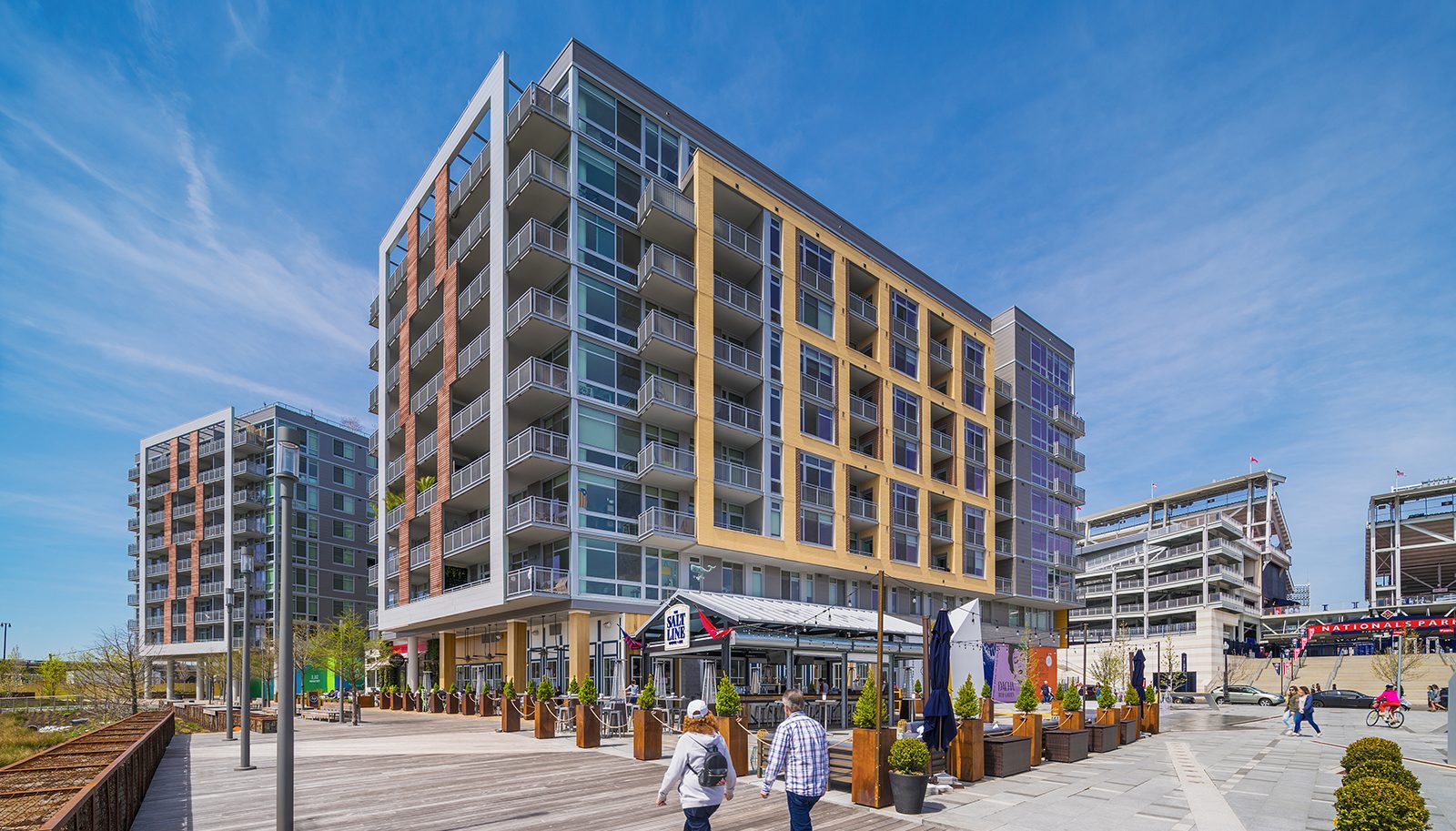 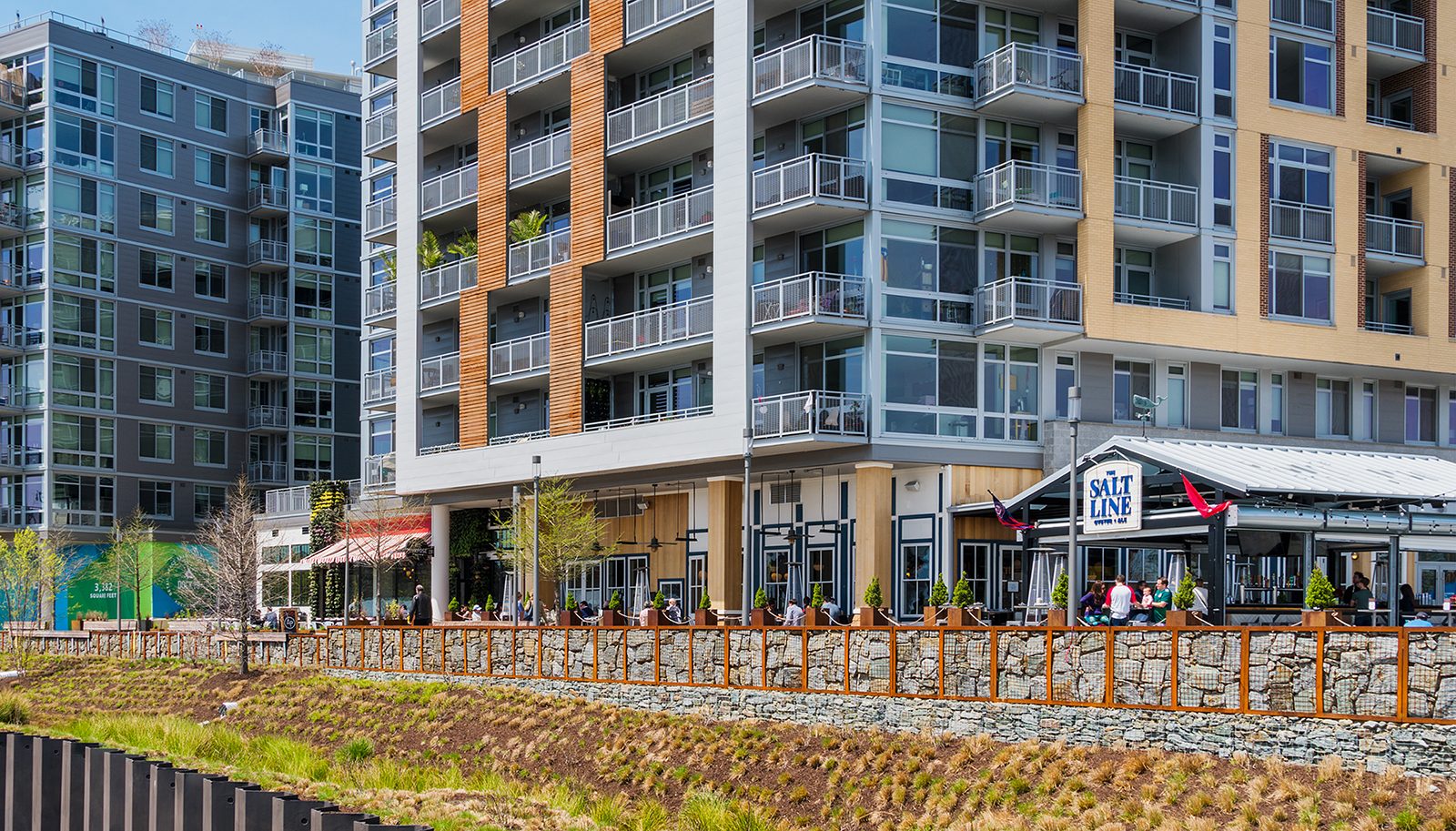 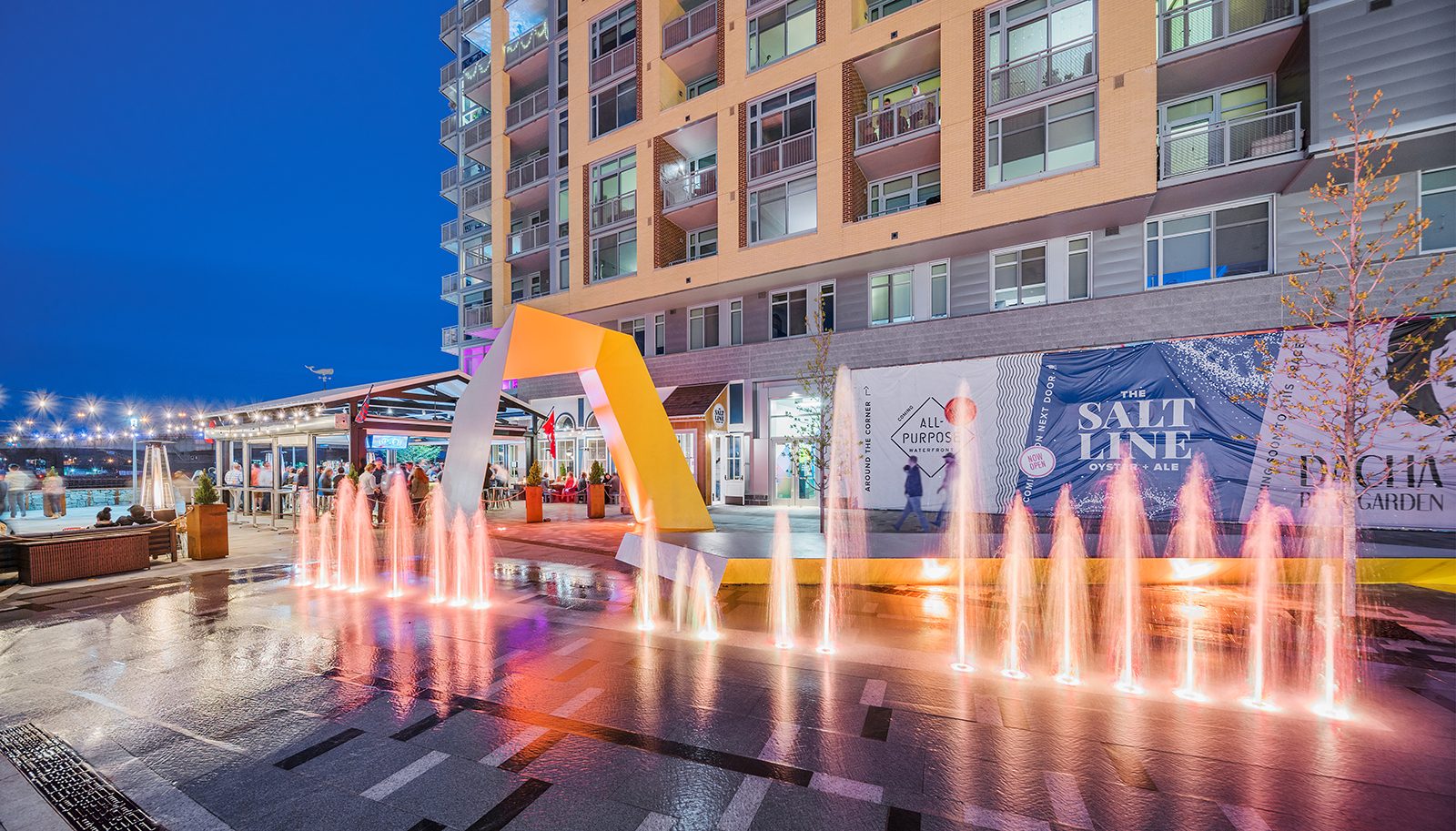 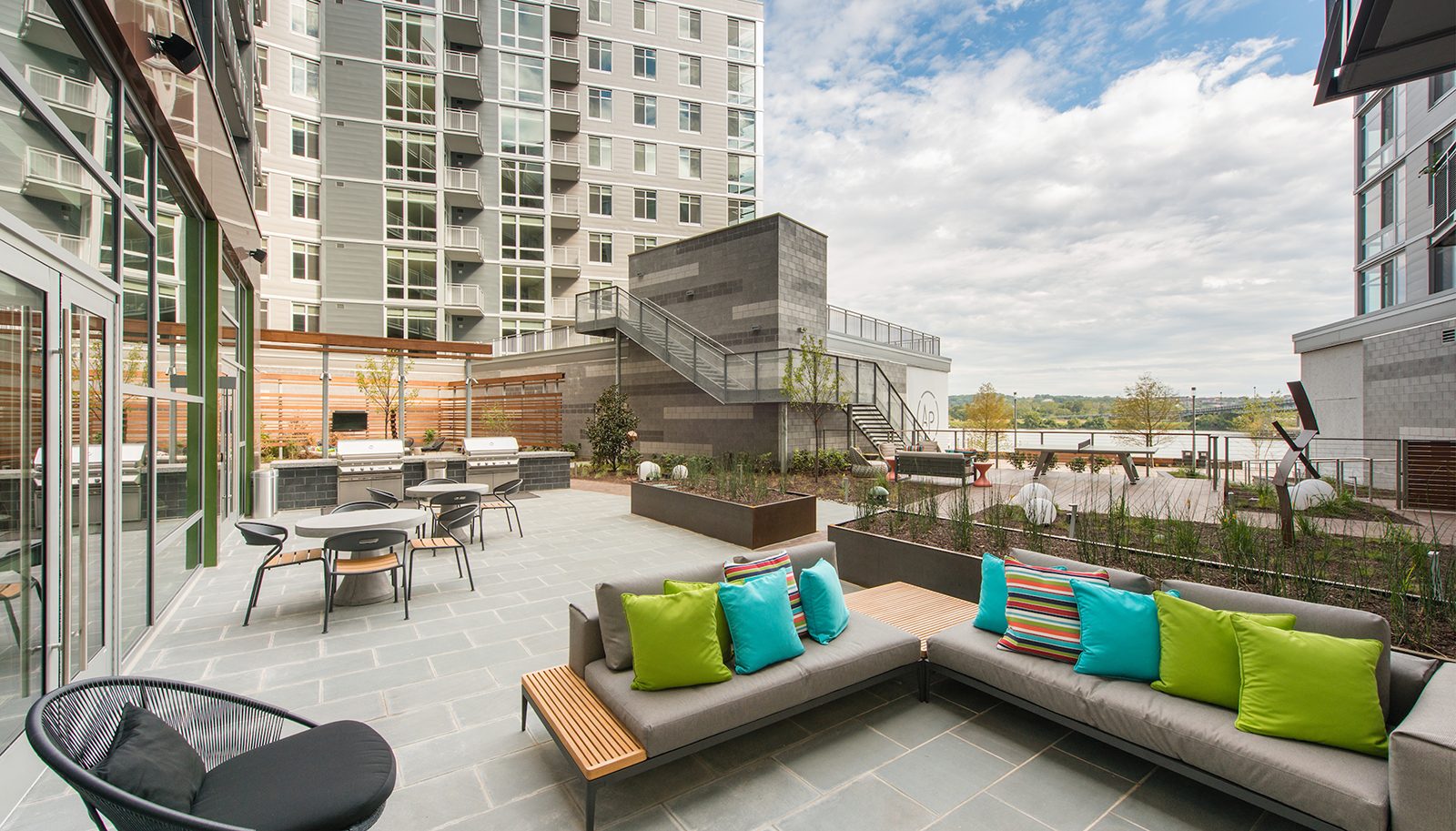 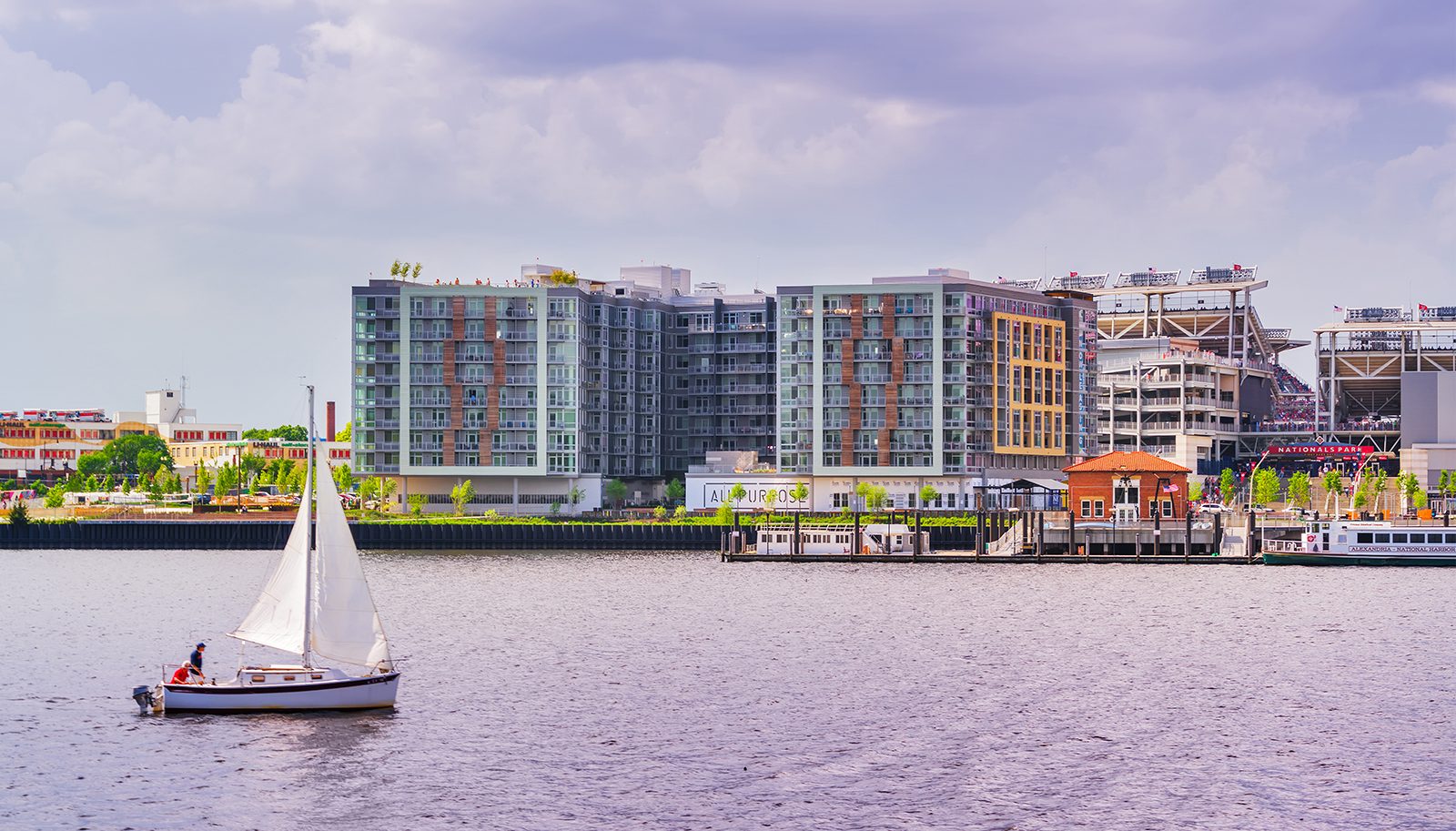 Through beautifully responsive architecture, Dock 79 has had a tremendous local impact with the creation of a quiet, waterfront community that consists of a dynamic public plaza, new waterfront restaurants, 15,000 SF of retail, the continuation of the Riverwalk Trail, and rigorous environmental considerations that will improve the health of the Anacostia River.

From its location to its design, Dock 79 is a true celebration of the booming Capitol Riverfront neighborhood. Our vision began with a desire to design a dynamic, mixed-use community with open space that would be a functional, interactive space that connected the evolving riverfront neighborhood. We designed a public plaza that serves residents as well as visitors to the ballpark and the extensive amenities of the neighborhood. Located three blocks away from the Navy Yard metro station, Dock 79 is the realization of unique opportunity to reactivate the Anacostia Waterfront with a mixed-use development at the property, which has 600 linear feet of riverfront. Dock 79 is Phase I of a four-phase, mixed-use development at the site of the former Florida Rock Concrete plant. Understanding the economic and historic significance of the undeveloped waterfront locale was important for this initial phase to immediately become a successful project.

Dock 79, phase one of a four-phase, six-acre waterfront site, overlooks two major elements of the Navy Yard District. On one side is the Nationals Park—home to the city’s major league baseball franchise—and on the other side is the Anacostia River. Utilizing the site’s relationship to the Anacostia River and the Nationals Ballpark, the composition of the U-shaped massing creates an urban edge towards the side facing the stadium, but also opens the side facing the river and thereby providing spectacular views of the waterfront.

The site is situated along the Anacostia River on a former industrial site. The proximity to the river required a unique foundation design that includes a blindside waterproofing system below the mat slab and a series of structural tiedowns through the mat slab that led to challenging condition for waterproofing. The waterproofing details that were developed by the design and construction teams in a collaborative effort to meet those challenges. Additionally, Dock 79’s location being directly on the riverfront of the Anacostia required some innovation to meet city requirements and provide 290 underground parking spaces in the bustling Capitol Riverfront neighborhood. The parking garage is a basin-like structure submerged in water and secured by drilling down nearly 50’ to anchor it to the rock bed below. The process also required a complex drainage and flood protection system that provided extensive filtering to protect the Anacostia River and support “A Waterway to 2025” initiative to have a swimmable river by 2025.

RESPONDING TO THE SITE

Recognizing the site’s relationship to the Anacostia River and the importance of the water views, the 305-unit building is based on a U-shaped mass oriented towards the water. The site is also overlooking the Anacostia River, the Nationals’ Stadium, and historical remnants of the neighborhood’s industrial past. In response to these seemingly opposing factors, the building was developed with two distinct languages. Facing the Esplanade, the south and courtyard facades achieve an open, playful feel through the extensive use of glass and shading devices. Additionally, large balconies afford wonderfully expansive views. In contrast, the facades facing the urban core are more structured and grounded. Masonry planes, floor-to-ceiling windows, and metal accents and railing are all used to create a relation to The Yards and subtly reconnect the industrial heritage of the area.

The richness of the community and culture at Dock 79 begins with the idea that is easy to leave a building but difficult to leave a community. The first connection to the community is visual. As you approach the building you are welcomed by a playful park that invites you to climb, play, compete, or relax. The plaza also includes four wooden chess tables, four steel umpire chairs, concrete tables, and an interactive water feature.

The park is located on the eastside of the development, sitting adjacent to The Salt Line, All-Purpose Pizzeria—both popular eateries for Nats fans, DC residents, and visitors—and the Anacostia Riverfront Trail attracts cyclists, families, game-goers, and young urban dwellers to embrace the scenic waterfront neighborhood. Creative programming brings residents together through a variety of events that include yappy hours, CrossFit events, Sip and Paint nights, holiday celebrations, Nationals watch parties, and waterfront yoga.

To ensure the continued improvement of the Anacostia River’s health, studies were done on the erosion impact of the project based on the slopes and existing site condition. Erosion and sediment control models were run to determine which site-specific controls would achieve 90% sediment removal efficiency within the 50-foot buffer from the river. Double layers of super silt fence, straw bale dikes, and safety fence were placed along the site perimeter and along the river bulkhead wall for erosion control, well exceeding the typical standards required by Department of Energy & Environment.

Since the project’s stormwater management system connects to the existing storm structures directly upstream of the river outfall, a check valve and a flap gate were installed on the existing structures to prevent surcharging of tidal water into the site bio-retention facility. To treat the stormwater for the entire site, an expansive bio-filtration garden, densely vegetated with native plants, absorbs stormwater, and removes pollutants before they can enter the Anacostia River.

Facing the Anacostia River and its adjacent esplanade, the south and courtyard facades achieve an open, playful feel through extensive use of glass, large balconies, shading devices, and color changing polychromatic metal panels that imitate the ever-changing nature of the water. The celebration of the river continues into the airy lobby that is flooded with natural light and textures inspired by the river. Suspended bird mobiles, rocking chairs, and floor to ceiling glass blur the lines between indoors and out. Amenity spaces provide residents places to connect and gather. The rooftop features an infinity pool with a disappearing edge, creating highly dramatic river views.

The View at Waterfront